Activists to march from Berlin to Aleppo for global awareness 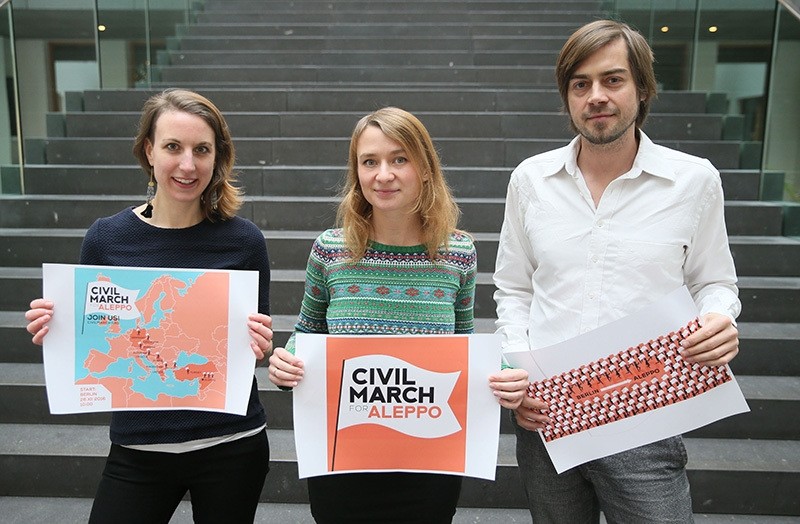 Activists from across Europe set Monday to begin a nearly 3,000-kilometer trek from Berlin to the war-torn Aleppo, via Turkey, with the goal of promoting immediate and unhindered humanitarian access to all besieged areas in Syria.

Polish blogger and journalist Anna Alboth called on everybody to join the start of the walk in Berlin to show European politicians how much the unfolding humanitarian tragedy in Syria means to them.

"We hope for 3,000 people at Tempelhof when we start out from Berlin. I know that many from Berlin will come just to say goodbye to wish us good luck, and to say that they support us," she told Anadolu Agency.

Officially titled the Civil March for Aleppo, the movement will bring together dozens of activists from various European countries who will walk to Aleppo on foot. The march will begin Monday from Berlin's former Tempelhof Airport, now serving as home to hundreds of mostly Syrian refugees.

Since Alboth and her friends announced their plans on Facebook last month, more than 13,000 people have expressed support for the initiative and more than 2,500 say they will join the walk on its first day.

Alboth said the initiative has no ties to any political party or an organization, but simply brings together average people who want to do something to stop the humanitarian suffering in Syria.

"I am a mother, we live in Berlin, I have two small kids. When I watched these videos from Aleppo, which we all watched, I just saw in these kids my own kids. And that's why I was so touched," she said, adding that she got the idea of organizing a march after talking with friends on Facebook.

"I expressed my feeling that I feel so lonely in front of my computer watching it … and going on demonstrations or sending money to organizations, I did all of these, but I think it's not enough. And then I realized that around Europe there are more people in front of their laptops in the same situation. And they answered ... So we are all like me, people who have had enough, totally average people, who don't have solutions for big conflicts, but we still don't want to stay silent," she said.

Alboth said while recent developments in Aleppo carry a symbolic importance, their walk would try to raise awareness of the humanitarian tragedy in all besieged areas in Syria, and increase pressure on politicians to help the Syrian civilians.

"I don't think that people can't do anything. This is, if people have decisions, they can do something, and I think if we weren't watching in this direction, and if we weren't showing the politicians that we care, they would not do anything," she said.

"But now when we stand up and do things, go to Aleppo in the big march, I would like them to see that all the voters, they care. So we want to force them to make decisions," she stressed.

Organizers underlined that the march would be open to everyone, including members of political organizations or parties who share their concerns about Syria, but they would only allow white flags during their walk.

The activists' route will take them through the Czech Republic, Austria, Slovenia, Croatia, Serbia, Macedonia, Greece, and finally Turkey, then to Aleppo.