EU faces up to risk of political turmoil as elections ahead 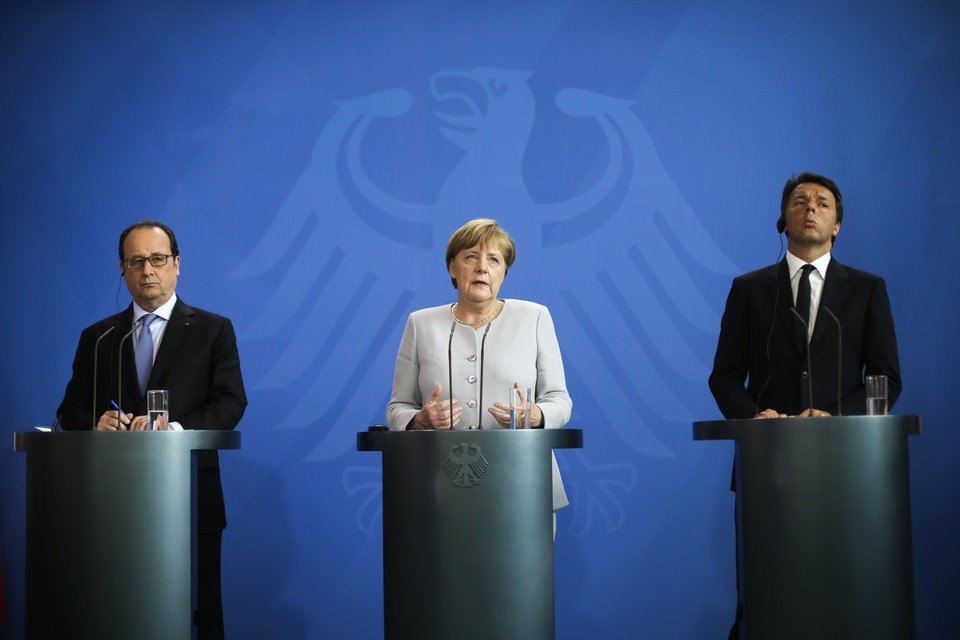 German Chancellor Angela Merkel, the former Prime Minister of Italy Matteo Renzi and the President of France Franu00e7ois Hollande brief the media during a meeting at the chancellery in Berlin.
by Compiled from Wire Services Jan 02, 2017 12:00 am

Along with the threat posed by the rising tide of populism that gripped the EU in 2016, elections in the Netherlands, France, Germany and possibly Italy could lead to a reshaping of the European political landscape

The U.S. President-elect Donald Trump's victory in the November election, Britain's shock vote in June to exit the EU has unleashed fears that another rogue result at any of next year's national poll could represent a major threaten to the EU. Still, some believes that 2017 might end on a positive note.

Polls are pointing to the conservative candidate Francois Fillon heading off the xenophobic National Front Marine Le Pen at next year's French president elections, as well as Merkel emerging triumphant in Germany's September poll. Wins for both Fillon and Merkel could help to restore the sense of stability at the heart of Europe, while reactivating the Franco-German partnership as the driving force behind the European project, according to analysts.

Le Pen, the National Front leader, wants to stop what she calls "massive" immigration and is urging an exit from the European Union and the 19-nation eurozone currency. Opinion polls suggest the leader of the National Front (FN) will finish second in next year's presidential election, but she is hoping for new momentum after Donald Trump's victory in the United States.

For two years, disaffection with mainstream politics and disarray among her opponents has played to Marine Le Pen's agenda. However, as the days tick down to election year in France, events may have started to dim her presidential prospects. Since late November, the anti-immigrant, anti-globalization far-right National Front candidate's showing in opinion polls has slipped from about three out of 10 voters to one in four.

A Harris Interactive survey after the Nov. 27 presidential primary put Le Pen on 24 percent of voting intentions, behind republican presidential candidate François Fillon on 26 -- her lowest score in months, and one that has not improved since.

The choice on Nov. 27 of Francois Fillon as Le Pen's main conservative challenger in the Republicans party primary was among the first signs of trouble.

She put a brave face on the victory for the former prime minister, whose socially conservative views on abortion and gay marriage are attractive to many Le Pen supporters and helped land him the ticket ahead of the more centrist Alain Juppe.

She focused instead on Fillon's aggressive plans to slash public sector spending, calling it an attack on the French workers she and her second-in-command, Florian Philippot, have promised to protect.

Another hurdle for Le Pen is the youthful Emmanuel Macron's announcement on Nov. 16 that he too is running for president, as an independent candidate who rejects the traditional politics of Left versus Right.

Opinion polls since then show the 38 year-old former economy minister consistently in third place. He is still well behind Le Pen and Fillon, but even before he launched officially, some of her worst scores were in scenarios where he stood against her.

Macron has yet to get down to deep policy specifics, and has targeted the centre, but pollsters detect a brand of "populism-light", and say his independence and youth could blunt Le Pen's anti-establishment appeal.

Amid a string of populist victories in Europe and the November election of Donald Trump as the next US president, the outcome of the Dutch vote will be keenly watched. The Netherlands holds parliamentary elections in March 2017. The most recent opinion polls predict the Freedom Party (PVV) will top the vote, saying it could seize 34 seats in the 150-seat lower house of Dutch parliament, some 10 seats ahead of his nearest rival, Prime Minister Mark Rutte's Liberals.

Observers say populist anti-Islam Dutch MP Geert Wilders has boosted his popularity among Dutch voters, worried about the influx of immigrants and driven by eurosceptic sentiments. He was found guilty on Friday of discrimination against Moroccans, but acquitted of hate speech in a closely-watched trial ahead of next year's key election.

Wilders, 53, immediately gave notice that he intended to appeal his conviction. He said his conviction of discrimination and inciting hatred was "insanity" and said the three judges who handed down the ruling were "haters" of his far-right PVV. "Three PVV-hating judges declare Moroccans a race and convict me and half of the Netherlands. Insane," he wrote in a tweet shortly after the verdict.

German Chancellor Angela Merkel faces a re-election battle in presidential election which will be held in February 2017. Merkel's decision last year to open the borders to refugees from war-torn countries like Syria, Iraq and Afghanistan drew global admiration, but also deep concern within Germany over whether the new arrivals could be integrated successfully. After being relegated to third place behind an anti-immigration Alternative for Germany (AfD) party in the regional election in her constituency in Mecklenburg-West Pomerania and then in Berlin, Merkel has suffered from low popularity, cutting a lonely figure in her struggle for resisting pressure to change her open-door refugee policy.

Germany is due to hold parliamentary elections in September. The Bavarian sister-party of Angela Merkel's Christian Democrats positions itself firmly against the chancellor's open-door policy toward refugees in a bid to win voters angered by the influx of migrants. The Christian Social Union (CSU) has always been more conservative than Merkel's party, which is active in the rest of Germany outside Bavaria. The so-called Union bloc comprising the two parties is expected to lose ground to the surging nationalist party AfD in this year's national election.

The anti-foreigner Alternative for Germany (AfD) has recently scored several stunning state election successes on the back of Germany's refugee crisis. Still, political analysts believe that Germany's Nazi past will rule the AfD out from playing any key role in the nation's political life for the coming years.

Resigning after almost three years in power after his constitutional reform plan was rejected in a Dec. 4 referendum, the former Italian Prime Minister Renzi wants to make a comeback and is pushing for an election in the spring, a year ahead of schedule. Italy's new prime minister, Paolo Gentiloni, avoided giving any hints on how long his own government would last.

The timing of the next election may depend on how quickly Italy can reform its electoral law.

There are two different systems in place for the two houses of parliament, which means elections would be unlikely to yield a clear result. But while all the parties agree on the need for reform, there is no consensus over a new law.

Using understated tones in sharp contrast to Renzi's exuberant and often confrontational style, Gentiloni said his government would encourage the parties to reach a deal but make no proposal of its own.

The electoral system pushed through by Renzi in 2015 is unusable because it assumed the upper house Senate would no longer be directly elected, as envisaged by his constitutional reform which was thrown out in the referendum.
RELATED TOPICS