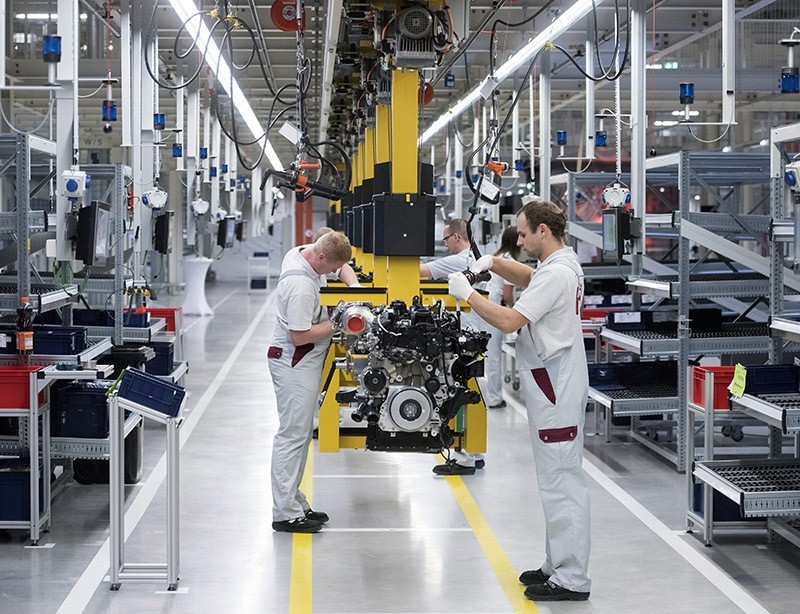 In this file photo workers complete a four-cylinder diesel engine in central Germany. (AP Photo)
by Jan 02, 2017 12:00 am
Job vacancies in Germany hit a record at the end of last year as immigration helped drive employment in Europe's biggest economy to an all-time high, data released on Monday showed.

The Nuremberg-based Federal Labour Agency said its indicator of the number of job vacancies climbed to 227 points in December – a rise of 21 points over the same month in 2015.

Meanwhile, employment in Germany rose 1 per cent compared with the previous year, to about 43.4 million in 2016, the Federal Statistics Office (Destatis) said.

The gain represented the continuation of a 10-year period of expansion in the nation's labour market.

The German population is ageing at one of the fastest rates in the world.

The solid state of the jobs market has played a key role in driving consumer spending, which is now a key pillar of economic growth in Germany.

Analysts are expecting the labour agency to say on Tuesday that the nation's unemployment rate held at a record low of 6 per cent in December after the monthly numbers out of work in the country fell by 5,000.

The labour agency will also release figures on Tuesday showing the actual number of job vacancies with officials saying there remained strong demand for workers in the service sector, as well as retailing along with the health and social service areas.
Last Update: Jan 02, 2017 4:55 pm
RELATED TOPICS