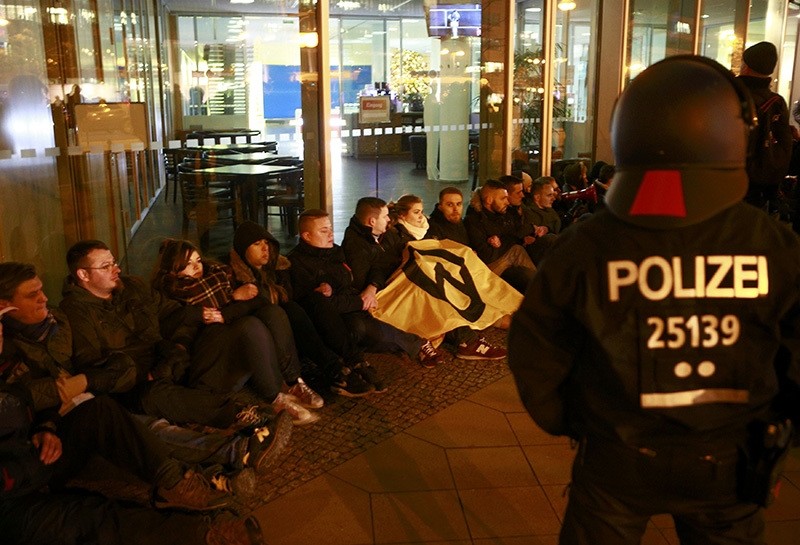 German police monitors supporters of the far right Identitarian movement (Identitaere Bewegung) who started a protest in front of the CDU headquarters in Berlin (Reuters Photo)
by Compiled from Wire Services Jan 03, 2017 12:00 am

The German state of Brandenburg will stop deporting failed asylum-seekers if they are victims of far-right violence.

The eastern state, which encircles Berlin, has seen numerous neo-Nazi attacks against migrants and refugee homes in recent years.

The Potsdamer Neuesten Nachrichten daily reported Tuesday that a decree instructs civil servants to use the leeway available to them to let victims of far-right attacks remain in the country.

Asylum-seekers who share responsibility for a violent incident or who have themselves committed a crime are exempt from the stay of deportation.

German police recorded 857 far-right crimes against refugee homes across the country in 2016, down from 923 the previous year.

The figures jumped sharply in 2015 amid an unprecedented influx of asylum-seekers to Germany. In 2014, there had been 177 far-right attacks.

Germany is sheltering the largest part of Europe's refugee population and Chancellor Merkel's coalition government is facing growing public criticism due to its liberal policy.

While Merkel's Christian Democrats suffered heavy defeats in regional elections, the far-right Alternative for Germany saw record gains, mainly through the use of anti-refugee propaganda.