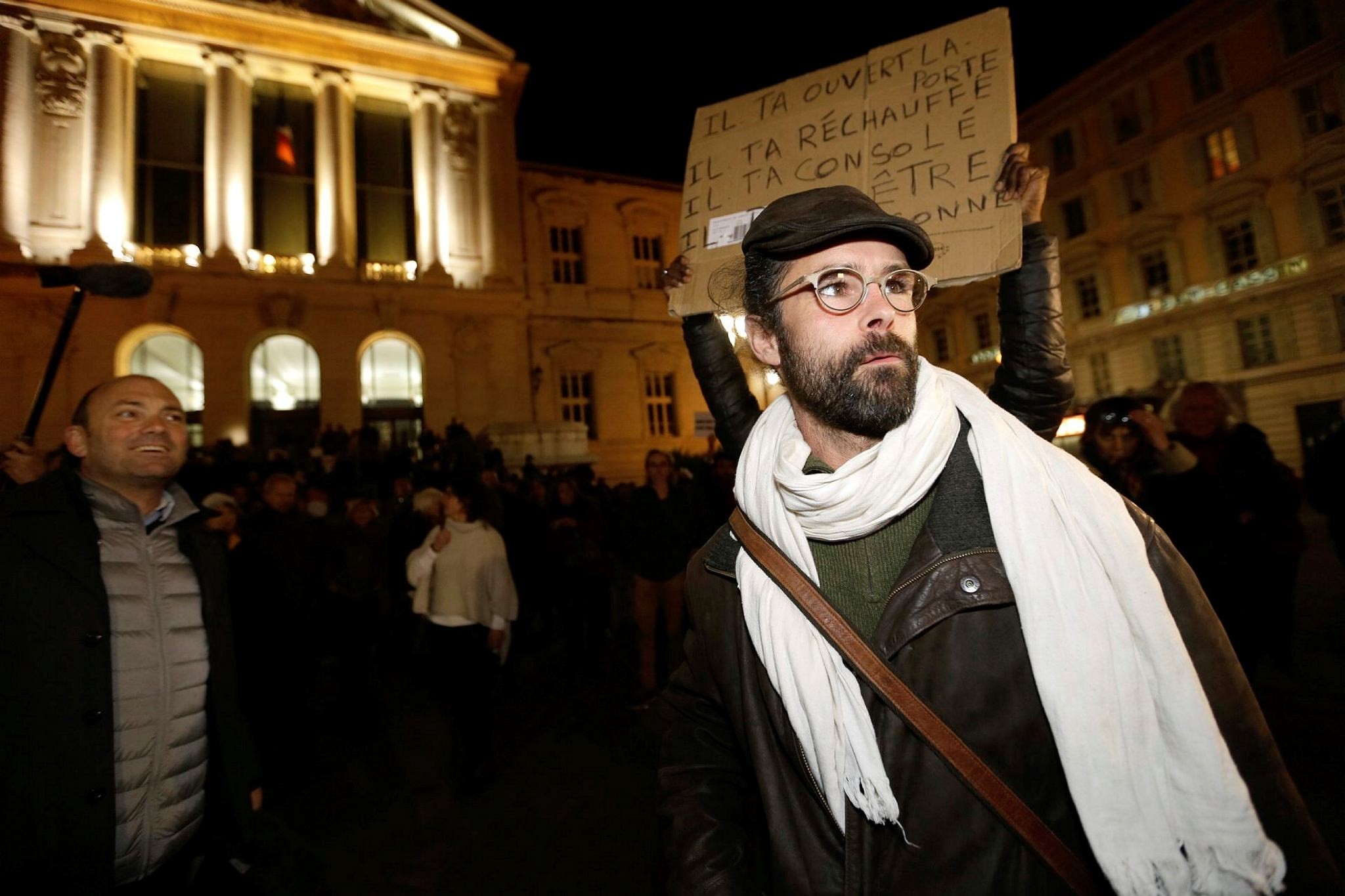 Cedric Herrou, a French activist farmer who is facing up to five years in prison as he goes on trial accused of helping illegal African migrants cross the border from Italy into France, leaves the Nice courthouse, southern France, Jan. 4.
by Compiled from Wire Services Jan 06, 2017 12:00 am

A French activist farmer facing potential prison time defended his aid to illegal African migrants in court Wednesday, calling it an act of humanity and not a crime. "Helping someone is not an offense!" read a placard at a protest in support of farmer Cedric Herrou outside the Nice courthouse where he went on trial Wednesday.

The case has called attention to those who have resisted Europe's anti-migrant sentiment and are offering food, lodging or other aid to people from impoverished or war-torn countries coming to Europe illegally. There has notably been an outpouring of support in the Roya valley in the Alps, where Herrou has taken in dozens of migrants over the past year.

He is one of three people in the area to appear in court recently for illegally assisting migrants travelling up through Europe after crossing the Mediterranean in rickety boats. Their cases have pitched the spirit of solidarity against the letter of the law at a time when border controls and migration have become hot political issues.

Herrou's olive farm sits in a valley near the frontier with Italy, near a popular route for migrants trying to skirt border controls established between the neighbors after last year's terror attacks in France.

The prosecutor asked for an eight-month suspended prison sentence and confiscation of Herrou's vehicle. The court could sentence him to up to five years in prison and 30,000 euros in fines if a guilty verdict is delivered Feb. 10.

Herrou says he is doing his civic duty and will keep helping the migrants, who are mainly from Eritrea and Sudan. "The law is against me, against actions to help people in need, so we have to change the laws," he told reporters.

Lucia Palermo, a 36-year-old artist from the Italian border town of Ventimiglia, was among several people demonstrating in support of Herrou.

Hundreds of refugees are risking their lives to enter the other end of France from northern Italy. The frontier between Italy's Ventimiglia and Menton in southern France is already known as "Mini Calais."

More than 24,000 refugees have been residing in the Italian town since late September as France refused their entry into the country, as reported by French newspaper Le Figaro. French officials argue that refugees should stay at the Italian side of the border under the Dublin regulations. The Dublin Regulation decrees that asylum seekers must apply in the country they first entered the EU.

According to Italy's interior ministry, about 124,500 migrants have arrived since the start of 2016, just slightly more than the 122,000 recorded for 2015. Italy is sheltering growing numbers of would-be refugees as its neighbors to the north move to tighten their borders and make it harder for migrants to travel to their preferred destinations in northern Europe.
RELATED TOPICS