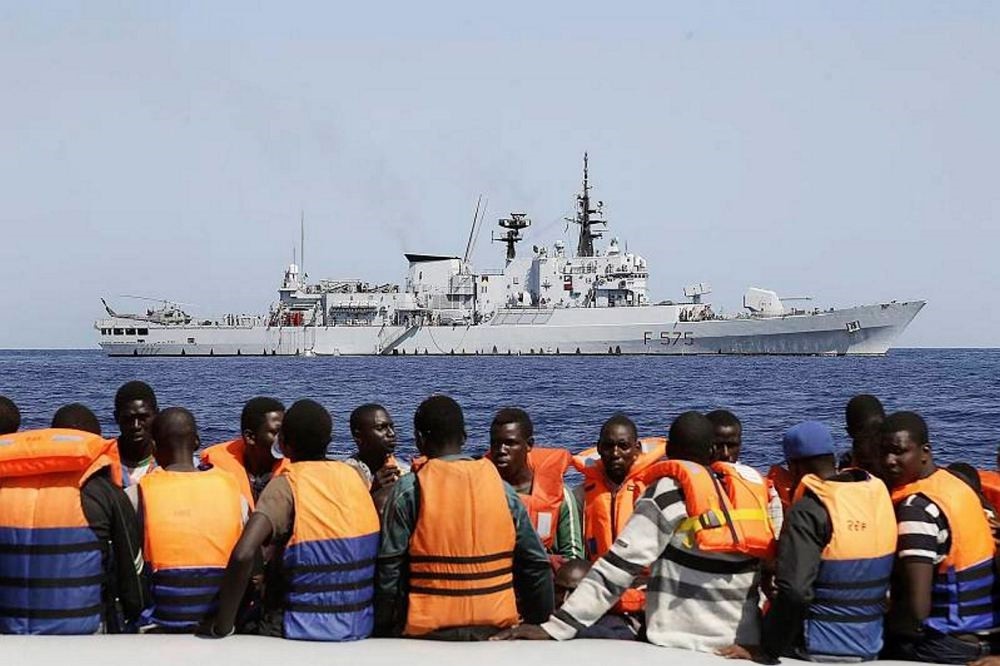 Sub-Saharan migrants transported to an Italian Navy vessel during a rescue operation in the southern Mediterranean Sea. (EPA Photo)
by Compiled from Wire Services Jan 07, 2017 12:00 am
The number of migrants reaching the European Union by sea fell by two-thirds in 2016 due to a migration deal with Turkey but arrivals in Italy from north Africa hit an all-time high, the EU said on Friday. The deal concluded in March provides Turkey with billions of euros as long as it keeps refugees on its territory and stops people smugglers from moving them across the Aegean to Greece.

It also involved promises to Ankara of financial aid, visa-free travel to much of the EU and accelerated membership talks, which have all been put on hold because of Turkey's crackdown on critics after a failed military coup last July.

Some 181,000 migrants arrived in Italy in 2016 from North Africa through the so-called central Mediterranean route, the highest number ever recorded and 20 percent more than last year, it said.

The largest group of migrants arriving in Italy were Nigerians, Eritreans and Guineans, the agency added.

The International Organization for Migration had said previously that 2016 was the deadliest year for migration in the Mediterranean with almost 5,000 deaths.

The latest drownings, mostly West Africans leaving Libya for Italy, bring migrant deaths in the Mediterranean so far in 2016 to 4,636, he said. There have been 1,000 more deaths last year among roughly half as many people trying to reach Europe by sea, with some 343,589 arrivals so far in 2016, against 728,926 in 2015 at this point, according to IOM figures.

To regain control over the flows of people into the continent, the EU strengthened its external borders, struck deals with some of the main countries of origin and transit along the migration routes and suspended its Schengen free travel zone.

The European Union should curb immigration by banning refugee applications on its territory and setting up asylum application centers outside the bloc, according to proposals put forward by Austria's defense minister. "This would save lives and would curb organized people smuggling," Defense Minister Hans Peter Doskozil said in a paper, obtained by on Friday.

At the new centers, EU officials would quickly decide whether asylum seekers are in need of protection. The paper proposed Niger as a potential location, without naming other countries.

Migrants who pass this hurdle would be directly transferred to EU destination countries. The paper indirectly advocates an EU-wide cap for asylum seekers, by stating that "every country has capacity limits, beyond which integration is impossible."
RELATED TOPICS