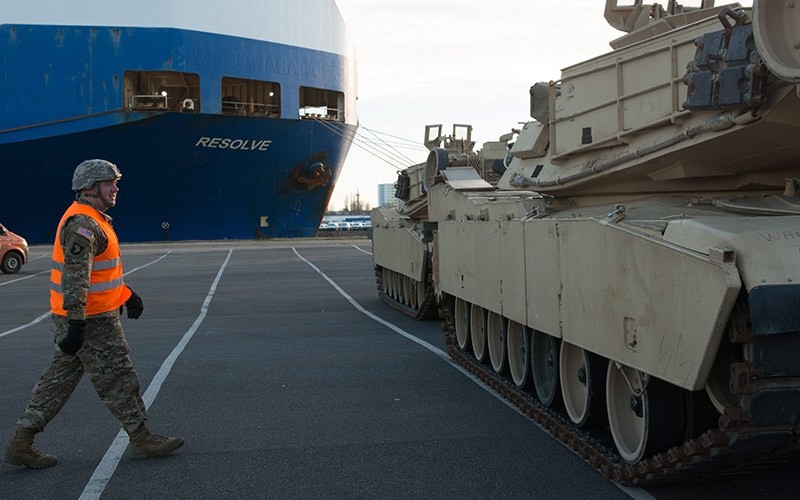 US soldier walks to a US Army tank in front of the cargo vessel 'Resolve' in Bremerhaven, northern Germany on Jan. 6, 2017. (EPA Photo)
by Jan 07, 2017 12:00 am
The U.S. are moving a tank brigade to Eastern Europe with the first military equipment and vehicles being unloaded in the German port of Bremerhaven on Friday.

The relocation of the tank brigade is part of operation Atlantic Resolve, which aims to ensure peace and stability in areas of Eastern European. The headquarters will be in Poland with the tanks initially being used for drills.

Poland, Latvia, Lithuania and Estonia all border Russia, which has worried its neighbours by its actions in Ukraine, most notably annexing the region of Crimea.

Two other ships are scheduled to arrive in Bremerhaven by Sunday, with the tanks and equipment then being transported to Poland.

The German army told local media that much of the ship cargo will go by train with the military convoy passing through the German states of Lower Saxony, Hamburg, Saxony-Anhalt and Brandenburg.

However, most of the approximately 4,000 US soldiers belonging to the brigade will fly directly to Poland by plane.
Last Update: Jan 07, 2017 1:21 pm
RELATED TOPICS