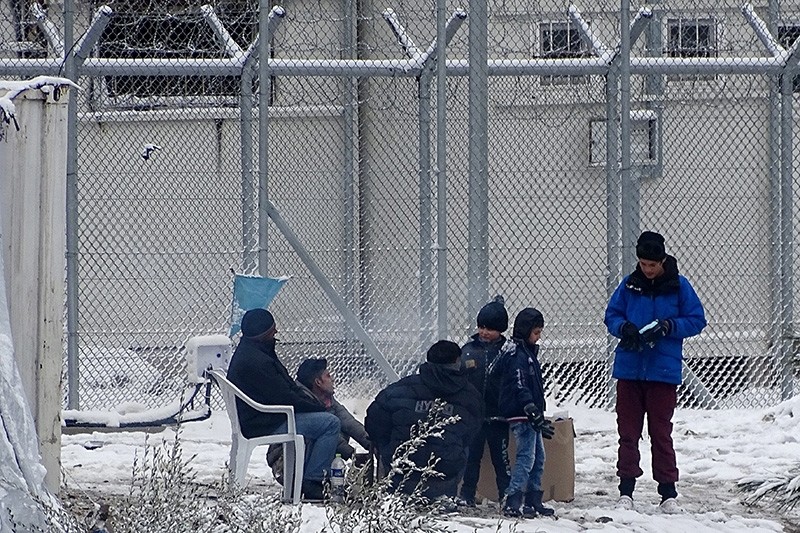 A refugee family sits in the snow at the Moria refugees camp on the island of Lesbos, after heavy snowfalls, on 07 January 2017 (EPA Photo)
by reuters Jan 08, 2017 12:00 am
A people smuggler left 19 migrants, including five children, at a motorway parking area in freezing temperatures in southern Germany and fled the scene, police said on Sunday.

Police said the temperature was -20 degrees Celsius (-4 degrees Fahrenheit) on Saturday when they found the migrants, one of whom had approached two other people at the parking area to raise the alarm after their driver left them.

They were freezing cold when the emergency services reached them near Brannenburg, just across the border from Austria.

The migrants, who were not carrying passports, said they came from Iraq, Iran and Syria. They told police they had paid between 500 euros and 800 euros ($526-842) per person to be taken from an Italian refugee centre to Germany.

Police said in a statement a munhunt had so far been fruitless for the driver of the van, carrying British licence plates.

Four of the migrant children were taken into the care of a youth welfare office. The other migrants were taken to a reception centre for refugees, police said.

Chancellor Angela Merkel's open-door policies have allowed into Germany about 1.1 million refugees from Syria, Iraq, Afghanistan and elsewhere since mid-2015.