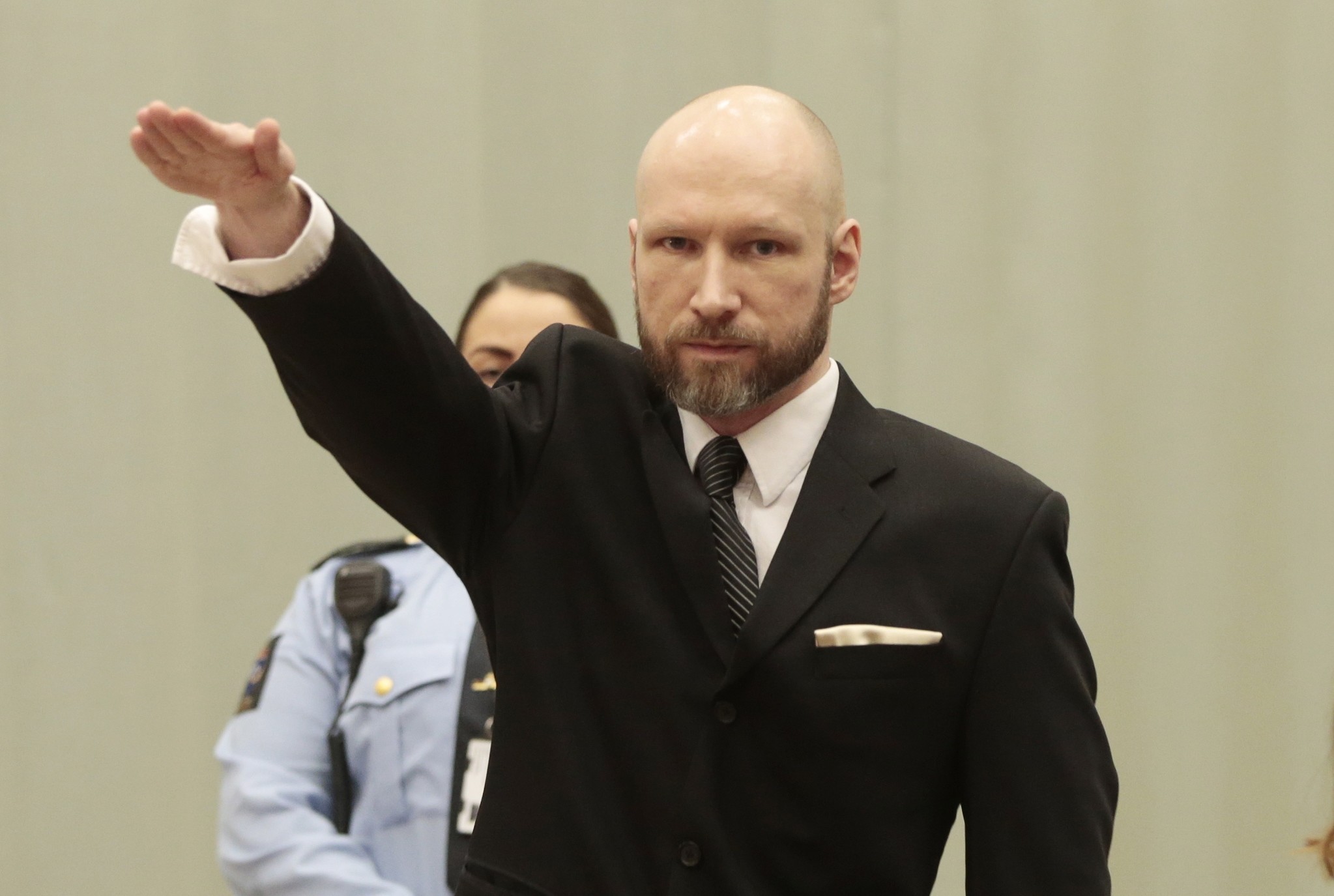 Anders Behring Breivik makes a Nazi salute ahead his appeal hearing at a court at the Telemark prison in Skien, Norway, on January 10, 2017. (AFP Photo)
by Compiled from Wire Services Jan 11, 2017 12:00 am

Sejersted defended the restrictions that mean Breivik has no contact with other prisoners but is compensated with a three-room lock-up with a gym, newspapers, a playstation and TV.

He urged the three appeal court judges to overturn a ruling in April 2015 by a lower Oslo court that Breivik's isolation from other prisoners violated a ban on "inhuman and degrading treatment" under the European Convention on Human Rights.

He also told the court that Breivik had attempted to post dating ads as a means of circumventing censorship rules in line with a European Court of Human Rights ruling.

Breivik received many letters, also from women, and had put up photos they enclosed in the three cells he has access to at the Skien high security prison. Sejerstad added that Breivik had received over 130 letters from a woman in neighboring Sweden.

A psychiatrist's assessment written in December 2016 said that Breivik "is more conspiratorial", wanted contact in jail with other extreme right-wingers and to form a fascist party with radicals on the outside to spread his views, he said.

It also said that he was more convinced his ideas were right and that others' were wrong.

Breivik's attorney Oystein Storrvik challenged the state's view that the 37-year-old was coping well in isolation. Storrvik noted that everyone Breivik interacted with had official roles: prison wardens, health staff, lawyers and a state-funded visitor.

"He has not a single person he can confide in," Storrvik said. He argued that Breivik should have contact with other inmates, who share common experiences in prison.

A district court ruled in April that some of Breivik's living conditions are "inhumane and degrading," violating the European Convention of Human Rights. That court, however, rejected Breivik's complaints that his correspondence is censored.

Both the state and Breivik appealed the 2016 ruling.

Breivik, who made a Nazi salute at the start of the court hearing on Tuesday, sat grim-faced and often shook his head in disagreement as Sejersted spoke. He is serving Norway's longest sentence - 21 years with the possibility of extension.

On July 22, 2011, Breivik killed eight people with a car bomb outside the prime minister's office in Oslo and then shot 69 others on an island near the capital, many of them teenagers attending a youth camp of Norway's then-ruling Labour Party.