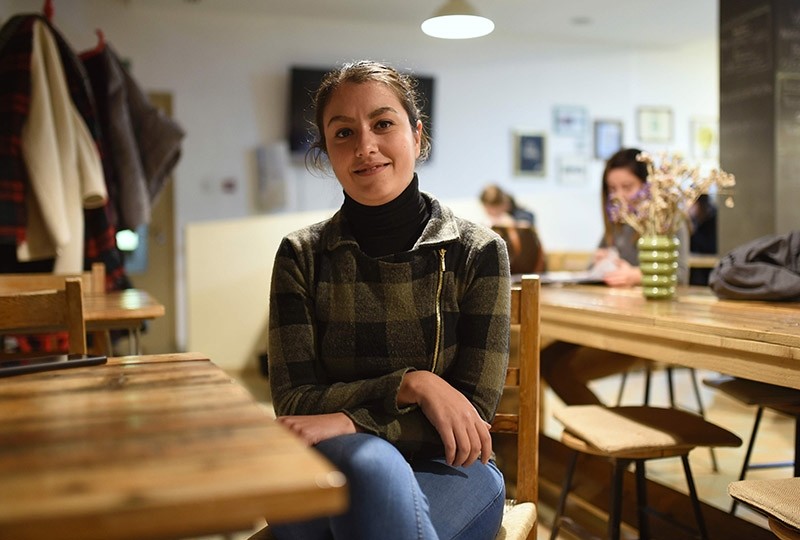 Hayriye Ru00fczgar, director of communications at the Home for Cooperation cafe which is situated in the buffer zone dividing Cyprus (AFP Photo)
by Jan 12, 2017 12:00 am

Between two checkpoints in Europe's last divided capital a coffee shop provides a venue for Greek and Turkish Cypriots to overcome their differences and dream of a shared future.

To sip coffee at Home for Cooperation, visitors must first show their identity papers to border police to enter the UN-patrolled buffer zone that runs across Nicosia and the rest of the island

The buffer zone "is not normal as an idea, so we make the idea more normal" by adding a cafe, says Hayriye Rüzgar, 25, communications officer for the coffee shop and adjacent cultural center.

The venue's location in no man's land makes it accessible to Cypriots from both sides, says the 25-year-old Turkish Cypriot.

As Cypriot leaders press peace talks this week in Geneva towards reunifying the island, Home for Cooperation is a concrete example of both communities coming together, says its manager Lefkia Heracleous.

"It's a good way to show that practically we can work together," says the 37-year-old Greek Cypriot.

The bi-communal center - a project inspired by teachers from both sides - opened in 2011, eight years after the opening of the border allowed residents to cross over.

Jazz plays in the background at the cafe, whose calm interior of wooden tables, large prints of photographs and endless shelves of books provide an atmosphere conducive to dialogue.

In the rest of the building, students flock to lessons in Greek language, Turkish, English, salsa and tai-chi. In the evenings, the coffee shop hosts concerts and debates organized by local associations.

"We have the same food... the same sun, the same rain here in Cyprus. It's very important to speak the same language" too, says Marina Payiatsou, a Greek Cypriot sociologist learning Turkish.

When the center opened, its teachers only had a few students, says Heracleous, but now they offer five classes of Turkish and three of Greek a week.

Home for Cooperation is just one of several initiatives bringing the two communities together.

Beyond groups organizing cycling excursions and tango parties, one association brings youth from both sides together to shoot basketball hoops.

For more than a decade, Peace Players has coached Greek and Turkish Cypriots aged 12 to 20 in the art of dribbling.

"In the beginning we saw a lot of kids who were shy" and "didn't want to talk together", says Jessica Walton, a Peace Players member from the United States.

"But then they see that they have more in common than what they thought. It doesn't take very long" even if they do not speak the same language, she says.

But such initiatives remain limited in Cyprus, where those born after the 1974 invasion have never known a united island.

Sultan Çavuşoğlu, a 40-year-old Turkish Cypriot, says she enjoys meeting her southern neighbors when she studies English at Home for Cooperation.

"It's easy to come here and it's a good way to meet Greek Cypriots," she says.

But "it's too late to reconnect people," she says of the wider political process towards a united island.

In a 2004 referendum, Turkish Cypriots largely approved a UN peace plan but their Greek neighbors rejected it, putting a damper on hopes for reunification.

"These communities have become strangers to each other," she says. But "people ask more questions every day". They have started "to realize that we cannot go on like this forever".

Sustainable peace will only come when both communities work together, she says.

"Achieving peace is more than a signature."