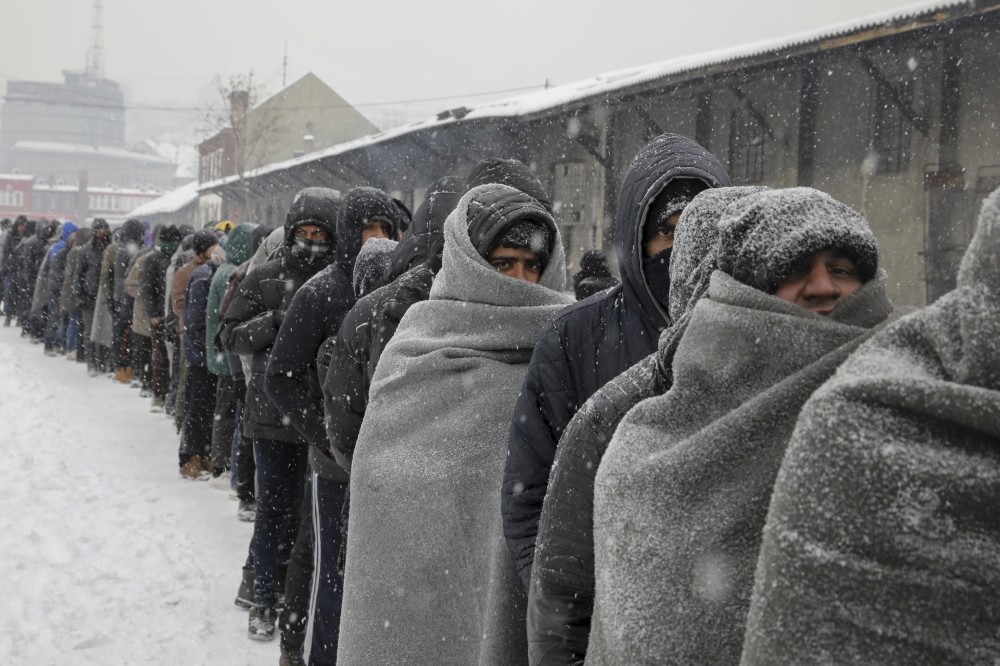 Refugees wait in line to receive a plate of free food during a snowfall outside a derelict customs warehouse in Belgrade, Serbia, Jan. 11.
by reuters Jan 14, 2017 12:00 am
Europe's recent cold spell left refugees and migrants in dire conditions and governments must do more to help them rather than push them back from their borders and subject them to violence, the U.N. refugee agency UNHCR said on Friday. "Children are particularly prone to respiratory illnesses at a time like this. It's about saving lives, not about red tape and keeping to bureaucratic arrangements," Sarah Crowe, a spokeswoman for the U.N. children's agency UNICEF said at a briefing in Geneva. "The dire situation right now is Greece." UNHCR spokeswoman Cecile Pouilly cited five deaths so far from cold weather and said that about 1,000 people, including children, were in unheated tents and dormitories on the Greek island of Samos, calling for them to be transferred to shelter on the mainland.

Hundreds of others had been moved to better accommodation on the islands of Lesbos and Chios in the past few days.

In Serbia, about 80 percent of the 7,300 refugees, asylum seekers and migrants are staying in heated government shelters, but 1,200 men are sleeping rough in informal sites in Belgrade.

"Given the harsh winter conditions, we are particularly concerned by reports that authorities in all countries along the Western Balkan's route continue to push back refugees and migrants from inside their territory to neighboring countries," Pouilly said.

Some refugees and migrants said police subjected them to violence and many said their phones were confiscated or destroyed, preventing them from calling for help, she said. "Some even reported items of clothing being confiscated, thus further exposing them to the harsh winter conditions," she said. "These practices are simply unacceptable and must be stopped."

Joel Millman, spokesman for the International Organization for Migration (IOM), said migrant movements across the Mediterranean had "started out in a big way" in 2017, and that the death toll for the year was already 27. The World Meteorological Organization said a movement of cold Siberian air into southeastern Europe had driven temperatures in Greece, Italy, Turkey and Romania to 5-10 degrees Celsius lower than normal. Such cold outbreaks happen about once in 35 years on average, the WMO said.
RELATED TOPICS