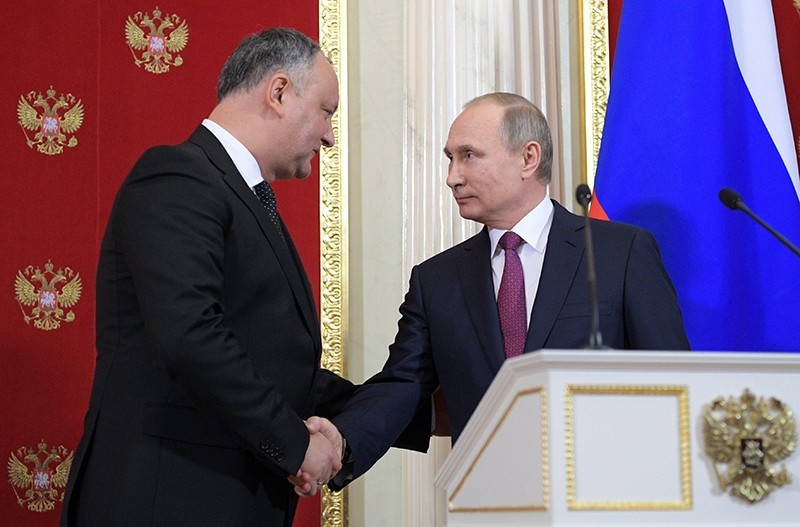 Moldova's President said Tuesday he hoped the ex-Soviet nation's association agreement with the European Union would be cancelled if his party obtains a parliamentary majority, paving the way for an alliance with Moscow.

Speaking after talks with President Vladimir Putin, the new Moldovan leader who won an election in November against a pro-European opponent, said he is seeking "full reestablishment" of economic cooperation with Russia because the EU deal did not bring promised trade.

Igor Dodon said after talks with Russian President Vladimir Putin that Moldova "got nothing" from the agreement while losing the lucrative Russian market. He said his government could move to annul the EU pact if it gets support for such a move after 2018 parliamentary elections.

He added that Moldova also was willing to take on observer status in a Russia-dominated economic alliance.

Standing alongside Putin, Dodon said Moldova "won't repeat mistakes of the past" and will work to rebuild close ties with Russia.

The Russian leader hailed Dodon for making a trip to Moldova's breakaway Trans-Dniester region, saying it showed courage and reflected respect for the region's residents that could help settle a long-running separatist conflict.

Putin said Russia, which has its troops stationed in Trans-Dniester, could act as a mediator and a guarantor of a settlement.

Before his trip to Moscow, Dodon said he wanted closer relations with Russia. Ties between the two countries deteriorated after Moldova signed the European Union association agreement and Russia placed a trade embargo on Moldovan wine, fruit and vegetables.

Moldova, an agricultural nation of about 3.5 million located between Ukraine and Romania, exports mainly to the EU, with more than 50 percent of exports going to EU markets in 2016. Its top market is Romania.

Russia, however, has remained a major market for Moldovan workers. There are about 500,000 Moldovans working in Russia, especially in construction.