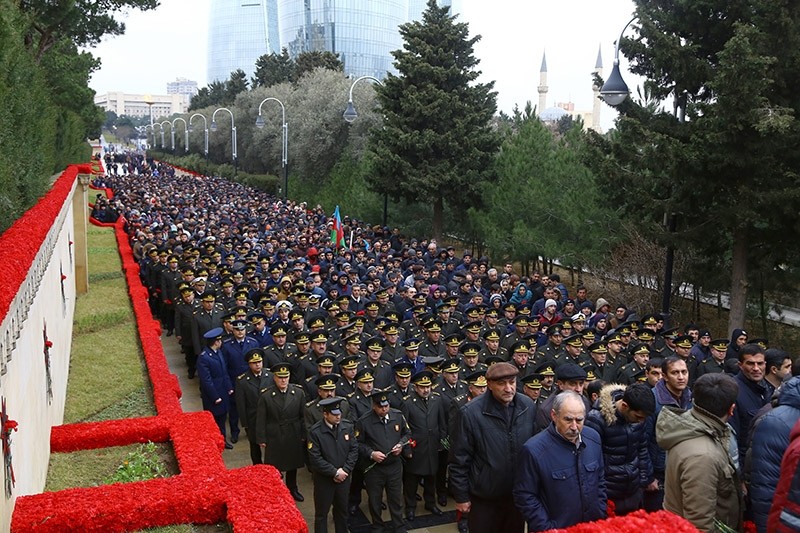 Azerbaijan honored on Friday the victims of the massacre perpetrated by Soviet forces on the night of Jan. 19-20, 1990, in Azerbaijan's capital city of Baku in a violent crackdown against Azerbaijani civilians protesting the annexation of Karabakh by Armenia that took place on Jan. 9, 1990.

The event had left over 130 Azerbaijani civilians dead, and is known as Qara Yanvar, which stands for Black January, in Azerbaijan.

On Friday, at 12:00 p.m. (GMT 8:00 a.m.) local time, one minute of silence was observed across Azerbaijan. Traffic and pedestrians stopped, and horns of cars, trains, and ships were sounded all over the country.

Flags were at half-mast all over government buildings, army barracks, and foreign missions to mark the day of national mourning.

Azerbaijani President Ilham Aliyev visited the Alley of Martyrs, memorial dedicated for the fallen during Qara Yanvar, and placed a wreath in the memory of those killed by the Soviet forces.

Erkan Özoral, the Turkish Ambassador to Baku, released a message in which he highlighted that the massacre was a turning point in the process of Azerbaijan's independence, while also noting that the struggle of the Azerbaijani people who stood against tanks will never be forgotten.

Commemoration ceremonies were held across various parts of Turkey, where Turkish people's solidarity with their Azerbaijani people were reiterated.