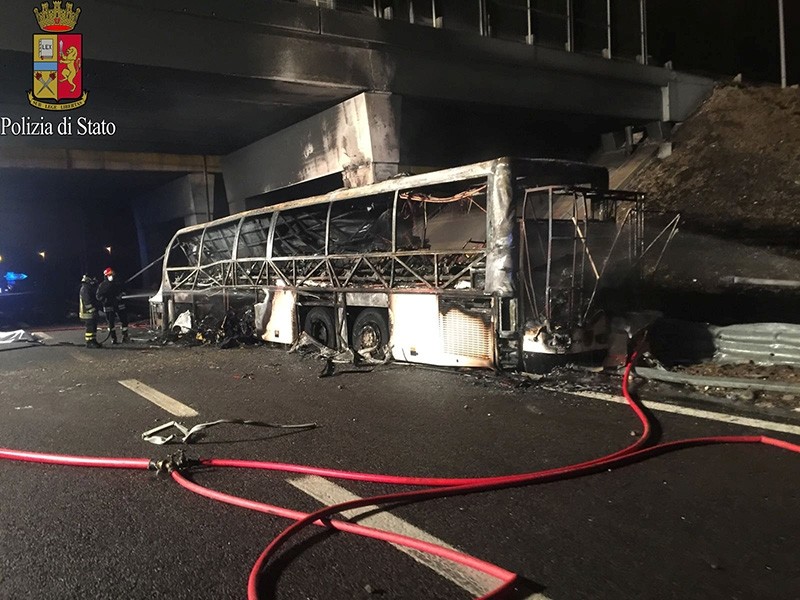 A charred bus, which was carrying Hungarian students, is seen on a side of a highway, near Verona, northern Italy, January 21, 2017. (Italian Police/Handout via Reuters)
by Compiled from Wire Services Jan 21, 2017 12:00 am

Sixteen people were killed and about 40 injured after a bus carrying Hungarian students burst into flames on a highway in northern Italy, police and the fire service said on Saturday.

The bus went off the road near a highway exit close to the city of Verona overnight. The local highway police chief said it was carrying mostly teenage students, teachers and parents.

"Many children among the victims of the accident in Verona, a bus catches fire on impact with a pillar," national police said on Twitter, adding they had come to Italy from France.

Lacquaniti said the cause of the crash would be investigated. "We are not aware of other vehicles being involved; it seems to have gone off the road of its own accord."

Police released photographs and television footage of the burned-out hulk near a road bridge. The wreckage had been removed from the road by around 0800 GMT.

Some were killed when they were thrown from the coach as it hit the pillar around 11:00 pm (2200 GMT) on Friday, but most were found badly charred inside the vehicle.

Most of those on board were Hungarian schoolchildren aged between 14 and 18, along with teachers and parents, returning home from a trip to France.

A spokesman for Hungary's foreign ministry said the bus was carrying two drivers and 54 passengers.

The French bus driver, together with his family, could be among the victims, Italian news agency Agi said.

Part of the motorway was closed while investigators combed the scene for clues.

According to media reports, one of those thrown clear of the bus was an older man, possibly one of the drivers.

The 10 or so most seriously injured passengers were taken for treatment to two hospitals in Verona, while those who escaped injury in the fire were taken by police to spend the night in a hotel.

In Budapest, the foreign ministry said official information was that there were 54 passengers, including adults accompanying the students, and two drivers aboard, but it believes the actual number was higher — for reasons yet to be determined.