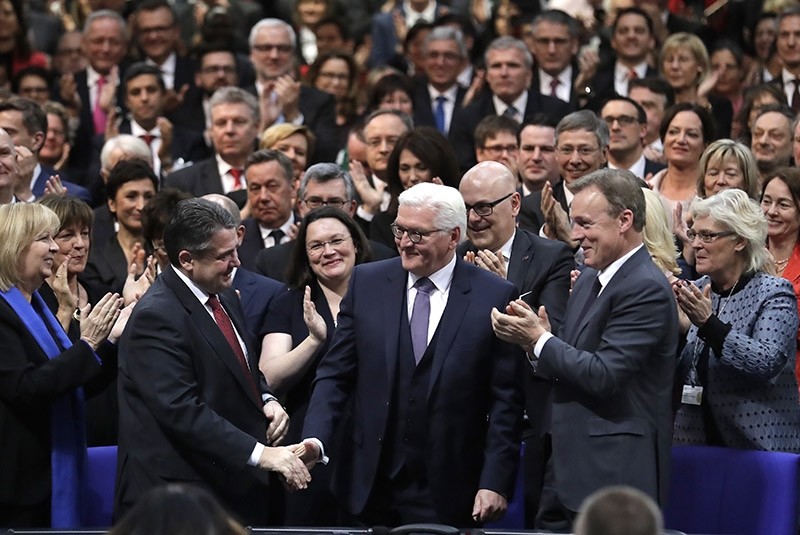 Steinmeier received the support of 931 out of 1239 members of the Federal Assembly, which combines members of the Bundestag and 16 federal state parliaments.

The 61-year-old politician was the joint candidate of the ruling Christian Democratic Union - Christian Social Union (CDU - CSU) and SPD grand coalition, which represents more than 65 percent of the votes and 70 percent of the seats in the federal parliament Bundestag.

However, the vote for Steinmeier was lower than what had been expected, with 103 convention members abstaining in the vote.

This points to possible frustration with the leadership of Chancellor Angela Merkel within the ranks of her conservative Christian Democrats (CDU) and their Bavarian-based allies, the Christian Social Union (CSU).

The CDU-CSU and the junior member of the Merkel-led coalition Steinmeier's centre-left Social Democrats (SPD) - had a combined convention vote of 923 national and state lawmakers in the assembly, which has a total of 1,260 members.

Members of the pro-business Free Democrats (FDP) and the environmentalist Greens were also expected to support Steinmeier, bringing the expected vote for the former foreign minister to more than 1,000. A candidate needed to secure 631 convention votes to win.

The German constitution mandates that a special assembly is convened to elect presidents. It includes 630 lawmakers in the Bundestag lower house and an equal number of representatives from the federal states.

"We live in turbulent times; people are uncertain," Steinmeier said in his acceptance speech.

But he said that Germans should take a sense of pride from their nation having become "an anchor of hope for many in the world."

"Let us be courageous, then. At any rate, I am not afraid of the future," Steinmeier said.

Merkel said Steinmeier would be an excellent president. "He is a man with the common touch," she said.

"I trust him to accompany our country very well through these difficult times," the chancellor said.

In his remarks opening the special assembly, the president of the German Parliament warned US President Donald Trump against leading that country into isolation.

"Whoever calls for cutting themselves off instead of pursuing an openness to the world should not be surprised if others do the same," said Norbert Lammert.

He criticized Trump's calls to put "America first" and accused him of "preaching" isolationism instead of promoting cooperation.

Steinmeier will next month replace Joachim Gauck, a 77-year-old former East German pastor and human rights activist, who steps down next month on March 18 as head of state at the end of his five-year term.

Regularly voted in opinion polls as the nation's most popular politician, Steinmeier faced four other candidates in the election for the post.

First convened in 1949, the convention draws its members from the world of German entertainment, sport and culture.

This year it included: the trainer of the nation's football team, Joachim Loew; drag queen Olivia Jones; and Semiya Simsek Demirtas, whose father was the first victim of an alleged neo-Nazi terrorist group the National Socialist Underground (NSU).