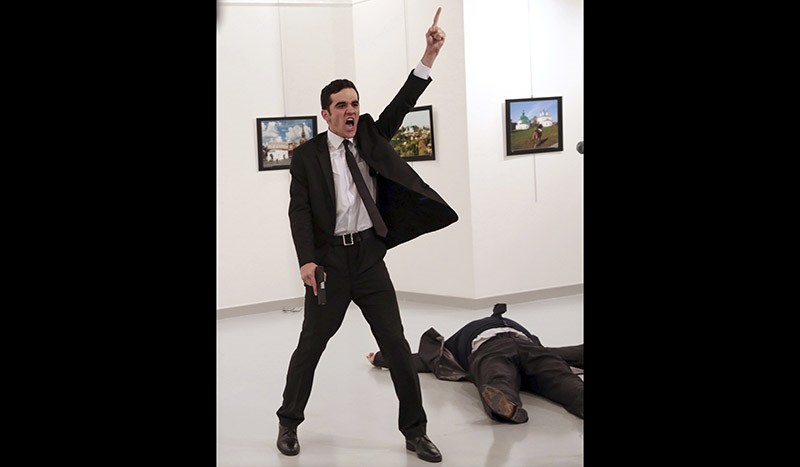 Associated Press photographer Burhan Özbilici won the 2017 World Press Photo competition Monday for his image of a gun-wielding off-duty Turkish policeman standing over the body of Russia's ambassador, whom he had just fatally shot.

Özbilici's image was part of a series titled "An Assassination in Turkey" that also won the Spot News - Stories category.

The photos were captured in the moments before and after policeman Mevlüt Mert Altıntaş drew a handgun and shot Ambassador Andrei Karlov at a photo exhibition in Ankara on Dec. 19.

In the winning photo, the gunman, wearing a suit and tie, stands defiantly, pistol in his right hand pointed at the ground and with his left hand raised, his index finger pointing upward.

His mouth is wide open as he shouts angrily.

The ambassador's body lies on the floor just behind Altıntaş. Another image in the series showed the ambassador before the shooting, with Altıntaş standing behind him.

Özbilici said his professional instincts kicked in despite the shocking scene unfolding in front of him. "It was extremely hot, like I had boiled water on my head, then very cold, very cold. Extremely dangerous," Özbilici said in an interview.

"But at the same time I understood that this was big history, it was history, (a) very, very important incident."

So the veteran AP photographer did what he has learned to do over some 30 years: "I immediately decided to do my job because I could be wounded, maybe die, but at least I have to represent good journalism," he said.

The winning image announced Monday was among 80,408 photos submitted to the prestigious competition by 5,034 photographers from 125 countries.

The jury awarded prizes in eight categories to 45 photographers from 25 countries.

"Burhan's striking image was the result of skill and experience, composure under extreme pressure and the dedication and sense of mission that mark AP journalists worldwide," said AP Executive Editor Sally Buzbee. "We are enormously proud of his accomplishment." Jury chair Stuart Franklin called Özbilici's image "an incredibly hard-hitting news photograph" and part of a strong series documenting the assassination.

"I think Burhan was incredibly courageous and had extraordinary composure in being able to sort of calm himself down in the middle of the affray and take the commanding pictures that he took," Franklin said.

"I think as a spot news story it was terrific." Denis Paquin, AP's acting director of photography, said Özbilici's actions that day were typical of his professionalism. "Burhan would tell you he was just doing his job. His humble professionalism, combined with incredible courage, enabled him to capture these unforgettable images," he said.