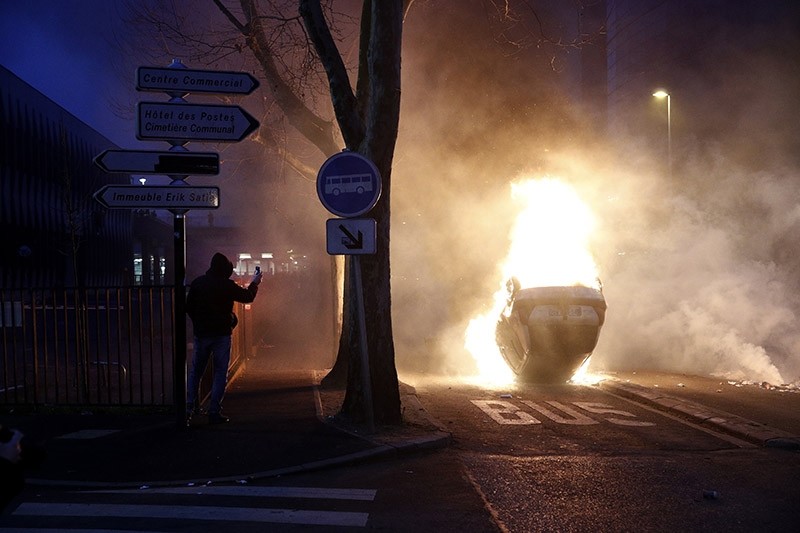 After a week of violence linked to the alleged rape of a young black man by police, protests turned into riots as youths set vehicles and garbage cans on fire leading to at least 11 arrests on Sunday night

Paris was shaken by violence and unrest once again as clashes erupted after a protest over the assault of a young black man allegedly sodomized with a police truncheon. The riots have been reportedly organized via social media due to their coordinated nature all over France. More than 50 people were arrested during the week-long riots.

France's interior minister condemned the unrest in a Paris suburb that led to at least 11 new arrests overnight, and called for calm. Bruno Le Roux urged angry youths to trust authorities to investigate the rape accusations. "I call for responsibility, serenity, and trust in the justice system," he told reporters in televised remarks on Monday.

Regional police said in a statement that 11 people including eight minors were arrested in Argenteuil, northwest of Paris, after youths set vehicles and garbage cans on fire.

Marion Le Pen, Marine Le Pen's niece, took to Twitter to post a video showing a patrol car reversing at extreme speeds, followed by a huge substantial crowd of sprinting rioters. She accompanied the clip with the statement: "Faced with the violence of scum, our police officers are forced to back off. Hurry up Marine and restore order to #Bobigny!"

The French Police have stated: "Several vehicles, including a media truck, were set on fire and police officers had to intervene to rescue a young child trapped in a burning vehicle."

The French Police operation in question that has sparked the ongoing nights of clashes and a national controversy started like thousands of others in the country's deprived suburbs. The violence appeared to be linked to claims by a 22-year-old man who said he was sodomized with a police baton after being arrested on Feb. 2 in Aulnay-sous-Bois. Three officers have been given preliminary charges.

The incident has again cast a spotlight on the problem of community policing, with the scandal inevitably becoming a political issue in a presidential election year.

"There's an almost permanent hostility against the police," academic Christian Mouhanna from the state-funded CNRS research center told AFP. "This is just the highly mediatized tip of the iceberg."

Thousands of police staged spontaneous demonstrations last October, with "Tired of being a target" signs after a firebomb attack on a patrol car south of Paris left a young officer with severe burns and in a coma.

Frederic Lagache, secretary general of the police union Alliance, says "relations between the police and the people are good, except where there's criminality."

The footage showing the alleged attack by the four officers is currently being investigated but as of yet there has been no official ruling. Much now hinges on the judicial investigation.

2015 saw mass riots centered on the same area in the northern suburbs of Paris. Aulnay-sous-Bois was one of several areas where riots erupted in 2005 after two teenagers who fled from police in the nearby neighborhood of Clichy-sous-Bois died from being accidentally electrocuted in a power station where they had hidden. That incident sparked three weeks of rioting in which 10,000 cars and 300 buildings were set on fire, prompting the then interior minister, Nicolas Sarkozy, to declare a state of emergency and drawing attention to the contrasts between Paris and the bleak suburbs around it.