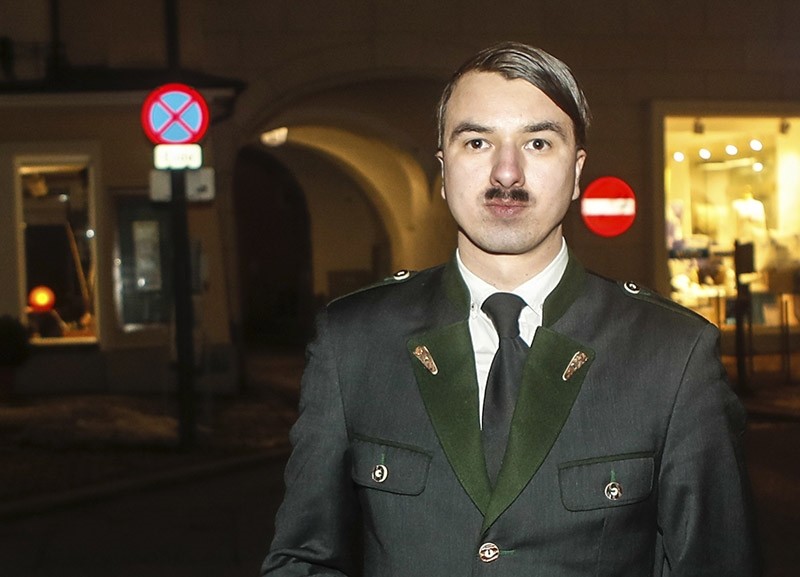 Harald Zenz poses for a photo in Braunau, Austria, before being arrested for possible violations of laws against glorifying the Nazi era. Feb. 2017. (AP Photo)
by Compiled from Wire Services Feb 15, 2017 12:00 am

Austrian police say they have detained a man described by local media as "Hitler's double" for possible violations of laws against glorifying the Nazi era.

Witnesses who have seen the unidentified 25-year-old say he sports a Hitler mustache, combs his hair in the style of the Fuehrer and dresses in Nazi-era regalia.

Police spokesman David Furtner said Monday the suspect was detained after being seen repeatedly in front of the house where Hitler was born in the town of Braunau, on Austria's border with Germany.

Multiple reports had trickled in prior to the arrest that a man dressed in Hitler's trademark uniform, along with a Hitleresque haircut and moustache had been seen in the town of Braunau am Inn, which lies near the German border.

The house where he was born is currently at the centre of a legal dispute. The government wants to evict the current owner so the building can be razed, an effort to keep it from becoming a pilgrimage site for neo-Nazis. But the owner has challenged the attempt in court.

The glorification of Adolf Hitler is punishable by law in Austria.