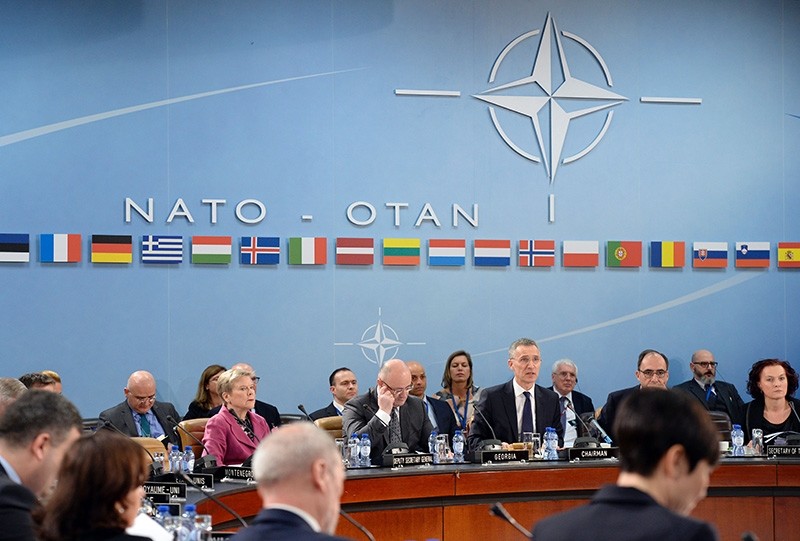 NATO Secretary General Jens Stoltenberg (C) speaks during the NATO-Georgia Commission at the NATO headquarters in Brussels on February 16, 2017. (AFP Photo)
by Compiled from Wire Services Feb 16, 2017 12:00 am

NATO defense ministers have decided to beef up the military alliance's naval presence in the Black Sea while taking additional measures in the cyber defense field and continuing efforts for stronger presence in the Baltic Sea, which are all targeting Russia.

Russia's naval fleet based at Sevastopol in Crimea has been a major concern for NATO, especially after Crimea was unilaterally annexed from by Russia on March 2014 in a clear violation of international law.

Stoltenberg said at the meeting the NATO allies discussed their presence in the Black Sea region and agreed on two additional maritime measures as well as a multinational framework brigade in Romania.

Stoltenberg described the new measures as "an increased NATO naval presence in the Black Sea for enhanced training, exercises, and situational awareness, and a maritime coordination function for our Standing Naval Forces when operating with other Allied forces in the Black Sea region".

He added, "And this shows allies stand together, united and strong".

Deployment in Baltic to be in defensive nature

The current deployment of NATO troops in the Baltic region is a clear warning to any power considering doing harm, the alliance's chief said in Brussels on Thursday.

"They are a clear demonstration of NATO's transatlantic unity and resolve. And they send a clear message to any potential aggressor," said Secretary General Jens Stoltenberg

The newly deployed four multinational battle groups will be fully operational by this June, Stoltenberg said.

But he argued the deployments are not offensive in nature but "defensive and measured".

The military alliance will not respond in kind to Russia, according to Stoltenberg.

"We will not match Russia soldier for soldier, tank for tank, or plane for plane. Our aim is to prevent conflict, not to provoke it".

The NATO chief also highlighted that the alliance had establish cyber rapid reaction teams and were helping the allies improve their own cyber defense, some months after the United States proved vulnerable to what U.S. intelligence says was Russian hacking designed to help Donald Trump win the presidential election.

"Cyber defense is another top priority for NATO… Today, we approved an updated cyber defense plan, and a roadmap to implement cyberspace as an operational domain".

He added that cyber defense was a part of NATO's response to hybrid capabilities and sharing information.