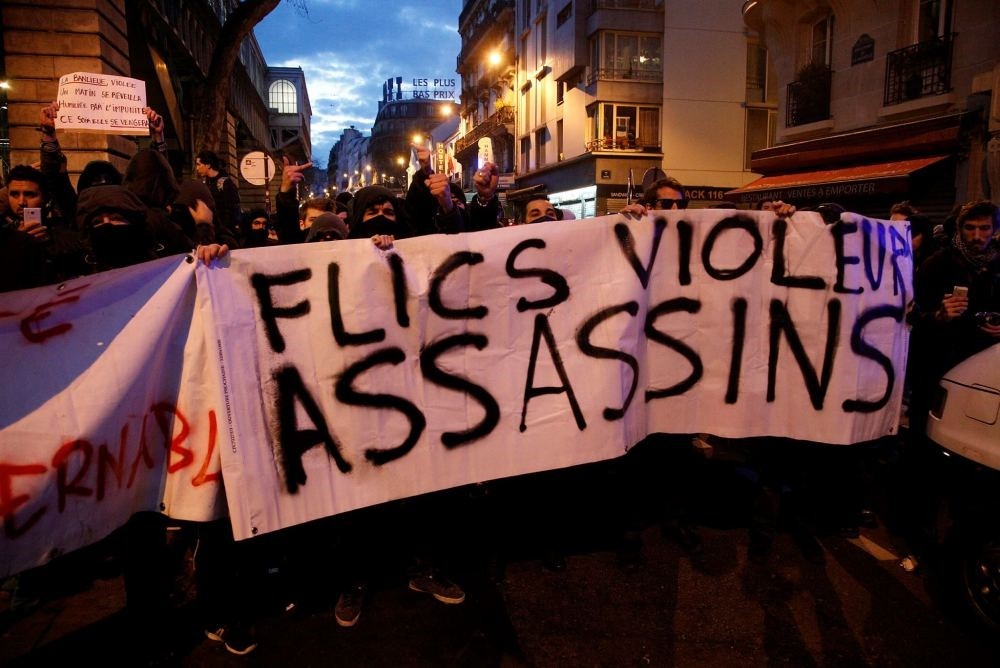 Demonstrators hold a banner reading ,Cops, rapers, killers, during a protest against alleged police abuses, in Paris, Feb. 15.
by Compiled from Wire Services Feb 17, 2017 12:00 am

Protests against police brutality for the last two weeks spread from the Parisian suburbs to the French capital, as over 200 people have been arrested and several dozen have been taken into custody across the country

Anti-police protests in the aftermath of alleged police brutality in a Paris suburb earlier this month descended into violence in the French capital on Wednesday night.

The protests, which have led to 245 arrests around France, follow allegations that a young man, identified only as Theo, arrested on Feb. 2 was beaten and raped with a police baton. An investigation is under way.

Protesters in the 18th District in the north of Paris lit piles of rubbish and rubbish bins on fire in the streets as riot police threw tear gas canisters, which were in turn thrown back at them.

French President Francois Hollande on Tuesday called for "justice" over the alleged rape of a black youth with a police baton, an incident that has sparked 10 nights of rioting and more than 200 arrests.

"Justice must be served," Hollande said during a visit to Aubervilliers, located in the tough Seine-Saint-Denis region northeast of Paris. Hollande also condemned the ensuing riots, which have shaken the belt of gritty suburbs surrounding Paris.

The injuries sustained by Theo during a stop-and-search operation in the suburb of Aulnay-sous-Bois have sparked clashes with police and arson attacks across the impoverished, ethnically-mixed housing estates that ring the French capital.

Hollande said France was determined to "show that we are capable of living together in a peaceful society, but where respect is the rule and where we must be firm towards those who diverge from this principle".

The call, published in Wednesday's edition of the leftwing daily Liberation, urged the use of cameras on police uniforms, the reintroduction of neighborhood policing and an overhaul of training policy.

A policeman has been placed under formal investigation for the suspected rape, and three others are under investigation for violent conduct during the arrest of the 22-year-old man in Aulnay-sous-Bois. The young man, Theo, whose family name has been withheld by authorities, remains in hospital with injuries to his anus and head.

With presidential elections in April and May, the alleged assault, which follows the death of a young black man in police custody in another Paris suburb last year, has become a campaign issue.

Far-right leader Marine Le Pen on Monday launched a petition "to support the police" after blaming "laxism in French society" for the problems of the restive suburbs.

The head of the anti-immigration National Front party called for a "major tightening of the screws" to boost police capabilities.

2015 saw mass riots centered on the same area in the northern suburbs of Paris. Aulnay-sous-Bois was one of several areas where riots erupted in 2005 after two teenagers who fled from police in the nearby neighborhood of Clichy-sous-Bois died from being accidentally electrocuted in a power station where they had hidden. That incident sparked three weeks of rioting in which 10,000 cars and 300 buildings were set on fire, prompting the then interior minister, Nicolas Sarkozy, to declare a state of emergency and drawing attention to the contrasts between Paris and the bleak suburbs around it.
RELATED TOPICS