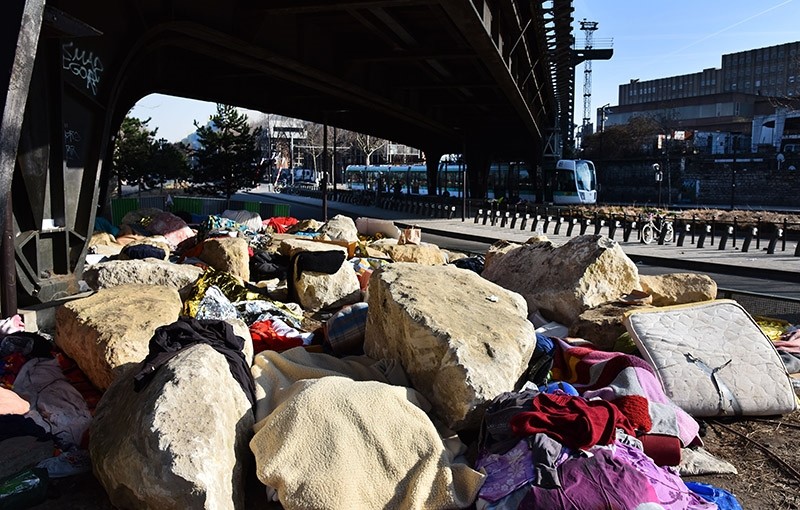 French authorities have made their zero-tolerance policy towards illegal camps and their inhabitants very clear. After tents were flattened and cleared up by clean-up crews at the La Chapelle Metro station, Parisian police placed a number of large boulders on the campgrounds to prevent the setting up of future tents.

A rising influx of immigrants has poured into Paris over the past several months after authorities decided that the situation in the French port town of Calais, across from the U.K., was too chaotic and needed to be taken care of. As a result, this led to thousands moving out of Calais to head for Paris.

A new refugee reception center was opened last November, but it has already reached full capacity — a prime example of Europe's inability to deal with the overwhelming wave of refugees and other immigrants.

The immigrants, mainly males of sub-Saharan African and Afghani origins, had been living under the bridge of Porte de la Chapelle for several months. They were expelled in the past for illegal squatting and littering but almost always ended up returning, seemingly for protection from the elements.

After the demolition of the Calais Jungle, several migrant camps have sprung up throughout Paris, including at the Stalingrad metro station. However, French Housing and Interior Ministers Emmanuelle Cosse and Bernard Cazeneuve originally denied the fact, stating, "There is no influx of arrivals from Calais," adding, "There has been no migrant movement between Calais and Paris."

Since no official tracking is taking place, technically it would not be possible to know where anyone is or was. Meanwhile, hundreds of thousands of immigrants have already gone off the grid throughout Europe. Other reports say that the influx to Paris is coincidental due to thousands of new entries from Italy.

A NGO called "Solidarité Migrants Wilson" stated that the municipality's boulder measure was unacceptable, adding that its volunteers had previously been threatened while giving out food to the immigrants sheltering in that area.

The organization also stressed that despite ongoing threats, they would continue to hand out food to the immigrants, who are still trying to sleep between the boulders while they wait to enter the nearby over-crowded reception center.

The mayor's office in Paris reportedly confirmed its decision to place the stones meant "to avoid street camping," according to L'Express.

After being asked about the image of the capital, an interviewee in the streets of Paris told an RT reporter: "I hope not, although it's true that I haven't recognized this district over the last year. It's shocking to exit the metro and be confronted with it all the time. It's bad and the refugees, they don't have anything, but it's not a solution to live here in tents."

So far there seems to be no conclusive answer to the back and forth situation going on between the police and the immigrants and with the looming Presidential election the future everything seems unclear.

Over 85,000 people applied for asylum in France in 2016, the Asylum Information Database reported.

Many travel to France from the Middle East, Africa and Afghanistan in hopes of a better life in the European Union, however they often have their applications rejected.