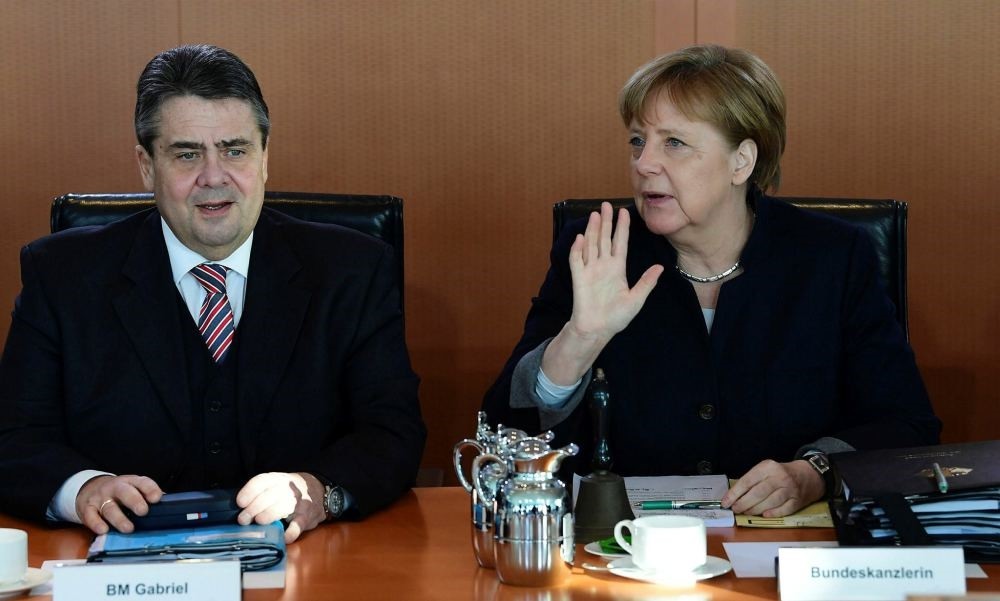 German Chancellor Angela Merkel and German Vice Chancellor and Foreign Minister Sigmar Gabriel wait for the opening of the weekly cabinet meeting on Feb. 15 at the Chancellery in Berlin.
by Compiled from Wire Services Feb 24, 2017 12:00 am

While Germany increases its defense spending, as promised to NATO allies, the issue has become a source of tension between Chancellor Merkel's Christian Democrats and Gabriel's Social Democrats

Amid the NATO defense spending row, Germany announced an increase to its defense spending as promised to NATO allies with soaring tension between Chancellor Angela Merkel's Christian Democrats and Gabriel's Social Democrats.

German Defense Minister Ursula von der Leyen, a conservative, on Wednesday criticized Gabriel for his remarks at the Munich Security Conference, where he warned against focusing solely on defense spending and unleashing a new arms race.

Gabriel was "already part of the government in 2014 when his fellow Social Democratic foreign minister signed off on the commitment" to NATO, von der Leyen told Germany's Stern magazine in an interview published Wednesday.

"It's not good when a government ... doesn't stick to its word after just three years," she told the magazine. "No one will understand if a country like Germany that is doing so well economically says 'We can't do it.'"

Gabriel fired back on Wednesday, saying the defense ministry's first priority should be to tackle delays and technical challenges with existing weapons programs. "Our biggest problem at the moment is that the equipment doesn't fly, sail or drive," he said. For instance, a brand-new German A400M transport plane was grounded earlier this month during von der Leyen's visit to German troops in Lithuania, while other big weapons programs have been delayed.

Henning Otte, a Christian Democratic defense expert in parliament, said lawmakers hoped to make progress on as many new arms projects as possible before parliament's summer recess. "These programs are essential for the continued readiness of the Bundeswehr, especially given the changing security threats," he said in a statement to Reuters.

Germany will increase its defense spending in the coming years as promised to NATO allies, but the government should also keep its military history and fears among European neighbors in mind, Foreign Minister Sigmar Gabriel said on Wednesday. "One has to ask whether it would really calm Germany's neighbors if we turned into a big military power in Europe," Gabriel told reporters.

Germany is to increase its army by 5,000 soldiers, the defense ministry said on Tuesday, bringing the total to 198,000 in 2024, at a time when U.S. pressure is mounting on European NATO members to raise military spending. "The German army faces demands like never before," Defense Minister Ursula von der Leyen said in a statement, adding that the army had to be able to respond in an appropriate way to developments abroad and security concerns.

The increase, long flagged by von der Leyen, comes at a time when U.S. President Donald Trump is pushing NATO members, especially from Europe, to raise their military spending.

The defense alliance in 2014 agreed to end years of defense cuts and meet a target of spending 2 percent of economic output on defense by 2024. German defense spending is currently at 1.22 percent.
RELATED TOPICS