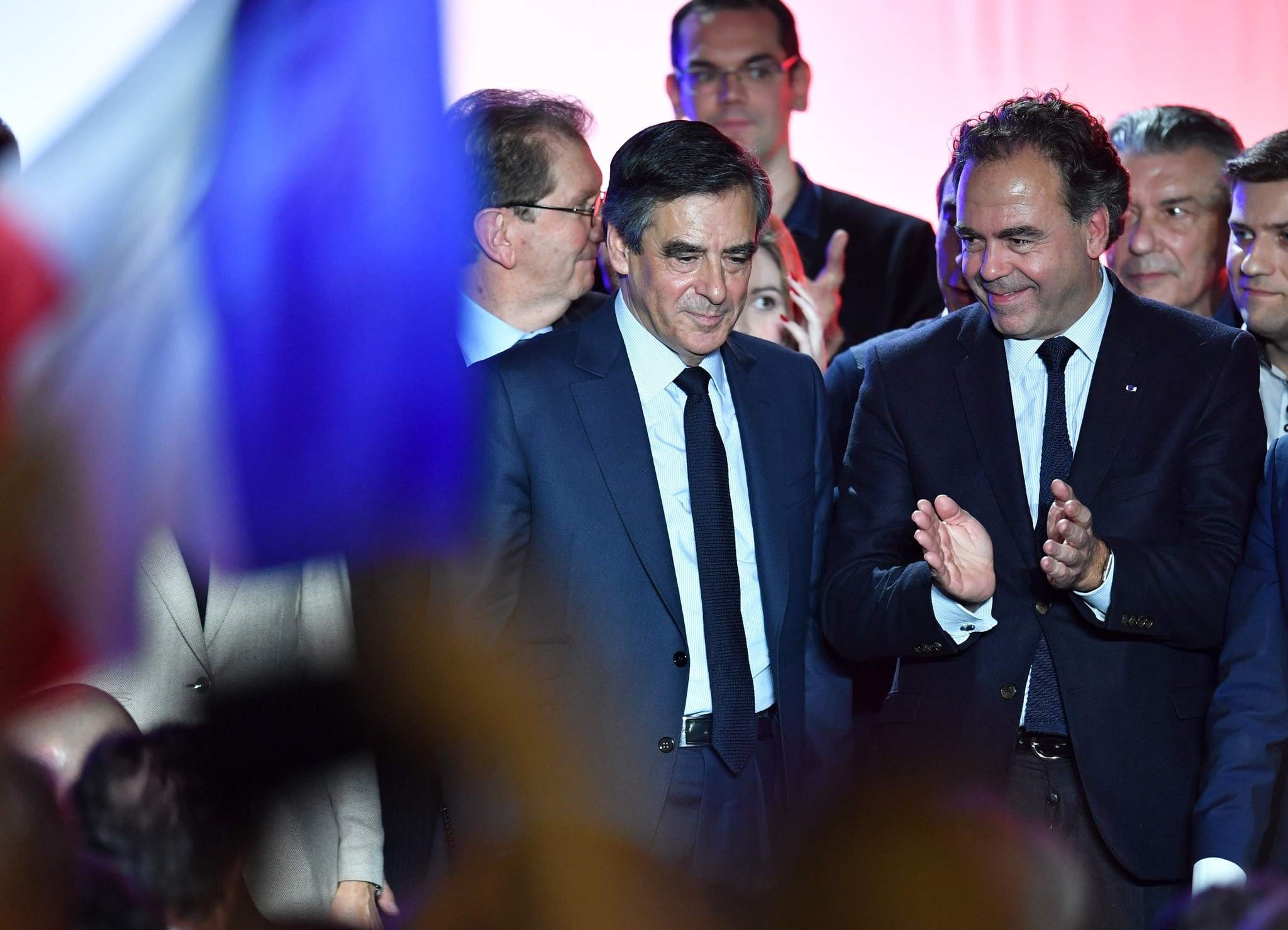 Police raided the Paris home of French rightwing presidential candidate Francois Fillon on Thursday over an alleged fake job scandal as a senior party colleague warned him he risked dragging his party "into an abyss".

Fillon revealed Wednesday he is set to be charged over allegations he paid his wife and children hundreds of thousands of euros for fake parliamentary jobs, but has vowed to continue his bid for power.

After searches at his parliamentary office last month, police raided his home in a central area of Paris on Thursday as he visited winegrowers on the campaign trial in southern France.

Fillon was accused by Dominique de Villepin, another former prime minister from his Republicans party, of driving the right wing "into the abyss" with his defiance.

"Going down this dead-end street is taking the state, our faith in democracy and its fellow travellers hostage," he wrote in Le Figaro newspaper on Thursday.

Fillon has called the charges over the fake jobs scandal "entirely calculated to stop me being a candidate for the presidential election" and has ruled out making way for another candidate.

But defections from his team and calls from senior Republicans for ex-premier Alain Juppe, 71, to step up have underlined the divisions and fears in his camp.

"The French people back me," Fillon told journalists defiantly on Thursday. "The base is holding."

New polls published Thursday suggested Fillon was in third place and would win 19-20 percent in the first round of the election scheduled for April 23, behind centrist Emmanuel Macron and far-right leader Marine Le Pen.

Thousands still turned out to his rally in the town of Nimes on Thursday evening and Fillon's calculation appears to be that he can close the small gap on his rivals in the remaining two months.

The top two from the first round proceed to a run-off on May 7, which Macron is currently shown winning.

But analysts warn against firm forecasts after a rollercoaster campaign so far.

Far-right leader Le Pen's legal woes also deepened on Thursday as the European Parliament lifted her immunity to allow her to be prosecuted for retweeting images of Islamic State atrocities.

The anti-EU, anti-immigration candidate also faces a separate parliamentary expenses investigation and a campaign financing probe in France -- all of which she, like Fillon, denounces as a plot to thwart her.

The investigation in focus on Thursday concerns graphic pictures including that of a beheaded journalist that Le Pen, a European parliamentarian, posted on social media in 2015.

They were addressed to a French television journalist who had likened her National Front party to the Islamic State group, leading police to open a probe into "the dissemination of violent images".

"The thing about the judicial affairs for Marine Le Pen and the National Front is that they are not about personal enrichment, while Francois Fillon's family is directly implicated," far-right expert Cecile Alduy from Stanford University told a conference this week.

Macron, meanwhile, promised a "strategy to make public life more ethical" as he unveiled his full programme for the first time.

The 39-year-old said he would bring in a ban on parliamentarians employing family members, bar candidates with criminal records from standing for public office, and increase the scrutiny of MPs' expenses.

Taking aim at his scandal-plagued rivals, he also accused them of "deliberately attacking our rule of law".

He founded his independent movement "En Marche" (On the Move) only last April and has been the main beneficiary of Fillon's woes.

He sought Thursday to take on critics who say his pro-European, pro-business platform lacks detail and substance.

"We are not looking to adapt or reform, but to transform," Macron told hundreds of journalists at a launch event to set out his agenda.

Macron believes France is too small to compete on its own in a globalised world and wants deeper integration between countries that use the euro, which would include the creation of a eurozone budget.

"Our responsibility in the years to come is to be able to rebuild the European dream," he said, adding that he would seek to persuade the zone's richest member Germany to invest in other countries.