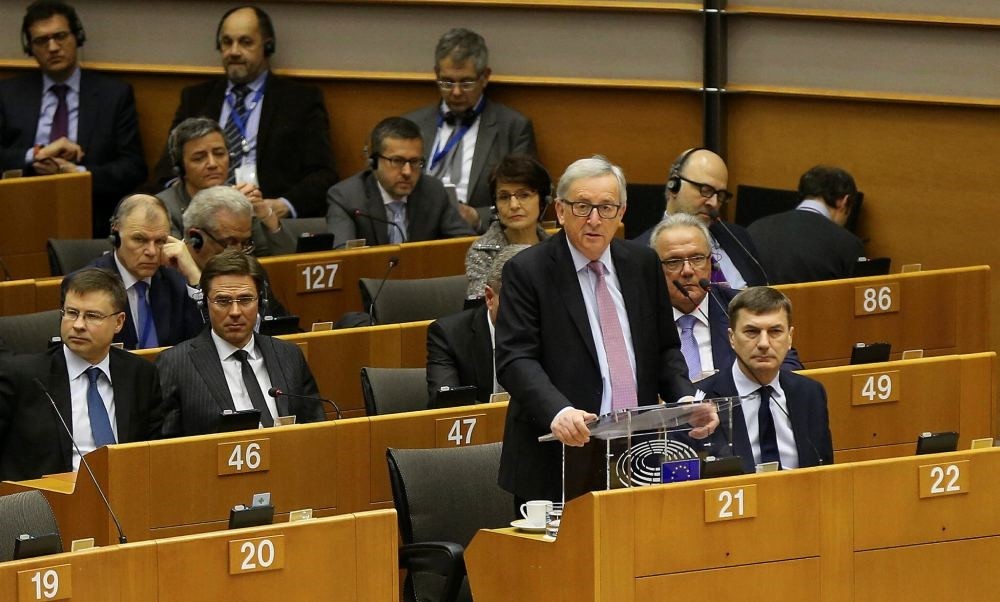 European Commission President Jean-Claude Juncker presents a white paper on options for shoring up unity once Britain launches its withdrawal process, in Brussels, Belgium, March 1.
by Compiled from Wire Services Mar 03, 2017 12:00 am

As Britain sets to activate Article 50 by the end of March, a procedure that will result in its EU exit in early 2019, the European Union's executive arm foresees five possible scenarios for the future of Europe by 2025

European Commission chief Jean-Claude Juncker said Wednesday that Britain's departure would not hold the EU back, as he unveiled plans for the bloc's post-Brexit future. Amid criticism from commission officials, Juncker laid out five possible scenarios including reducing the European Union to just a single market, returning some powers to member countries and creating a "multi-speed" Europe.

"However painful and regrettable Brexit may be, it cannot stop the European Union on its march to the future," Juncker said as he presented his White Paper to the European Parliament in Brussels.

Juncker also urged national governments to "stop the Brussels-bashing" in a bid to win over increasingly Eurosceptic voters, saying the commission had stopped meddling in issues like "toilet flushes or the height of children's swings."

The European Commission foresees five possible scenarios for Europe by 2025: to carry on as usual; function as a single market only; do less but be more efficient; allow groups of member states to advance at their own pace; or do far more together.

Commission officials said none of the five scenarios is preferred and that a combination of several or another approach entirely might be possible, even likely.

Juncker said later Wednesday that he thinks none of the five ideas "will ultimately be the final option. There will probably be a sixth option."

Three of the scenarios potentially pose challenges to policymakers.

Carrying on as if Britain's vote to abandon the EU was meaningless would send a damning message to a public already deeply skeptical about the European enterprise. But scaling back to a single-market trading entity could make it harder for people to cross borders or work abroad. Juncker himself said that he rules out "the European Union sinking to the level of a free-trade zone."

Many also oppose letting the EU do too much, which could concentrate more power in the hands of unelected officials in Brussels and raise the specter of a federal European super-state. Some moves might require changes to the EU's founding treaties, a series of constitution-like texts that have been painstakingly drawn up over the years and would require consensus to modify.

EU leaders will now consider Juncker's options ahead of a summit in Rome on March 25 marking the bloc's 60th anniversary, where they will make their own declarations about the way forward after Britain's expected departure in 2019.

The foreign ministers of France and Germany signaled that Juncker's "multi-speed" option had their backing, saying it would allow some members to move forward with projects like closer defense cooperation without waiting for reluctant countries to get on board.

"Without calling into question what we have accomplished, we must also find ways of better taking into account the different ambition levels of the member states so that Europe can respond better to the needs of European citizens," Jean-Marc Ayrault and Sigmar Gabriel said in a joint statement.

Since the shock Brexit vote last June, the other 27 EU states have been soul-searching about how to deal with challenges including rising populism, the election of Donald Trump in the United States and an increasingly assertive Russia. Rome should "not simply be a birthday celebration, it should also be the birth moment of the European Union at 27," Juncker said.
RELATED TOPICS