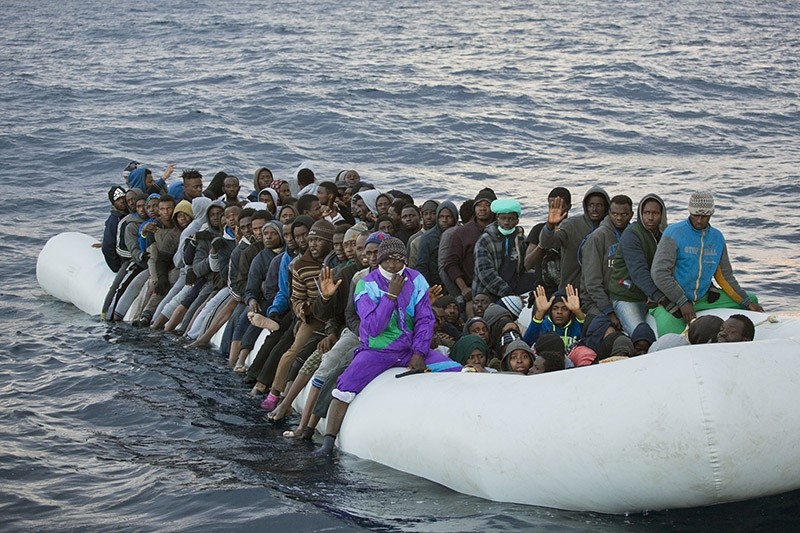 In Feb. 3, 2017 file photo, migrants and refugees wait to be helped by members of the Spanish NGO Proactiva Open Arms, as they crowd aboard a rubber boat sailing out of control in Mediterranean Sea about 21 miles north of Sabratha, Libya. (AP Photo)
by Daily Sabah Mar 03, 2017 12:00 am

Italian Coast Guard teams announced that they had saved some 970 migrants in a rescue operation from the Mediterranean Sea on Wednesday.

The asylum seekers were attempting to cross the sea to Europe, and were rescued from four big boats, small boats, and one rubber boat off the coast of the north African country.

The Italian Coast Guard announced that it had coordinated the rescue operations with a Norwegian ship under the command of the EU border protection agency Frontex and two humanitarian vessels provided by the SOS Mediterranée Organization, Doctors Without Borders, and Catalan NGO Proactiva Open Arms.

The Coast Guard pointed out that the number of migrants attempting to make the treacherous journey across the Mediterranean has begun to rise as the weather becomes warmer.

Last year some 181,000 migrants arrived in Italy and 5,000 people died in the sea trying to reach safety.

The UN announced that 440 people had drowned in the Mediterranean off the coast of Libya in the first two months of this year.

Six years after the overthrow of Moammar Gadhafi, who ruled Libya for 42 years, the lack of stability and chaos in the country have made it a major jumping off point for immigrants trying to reach Europe.