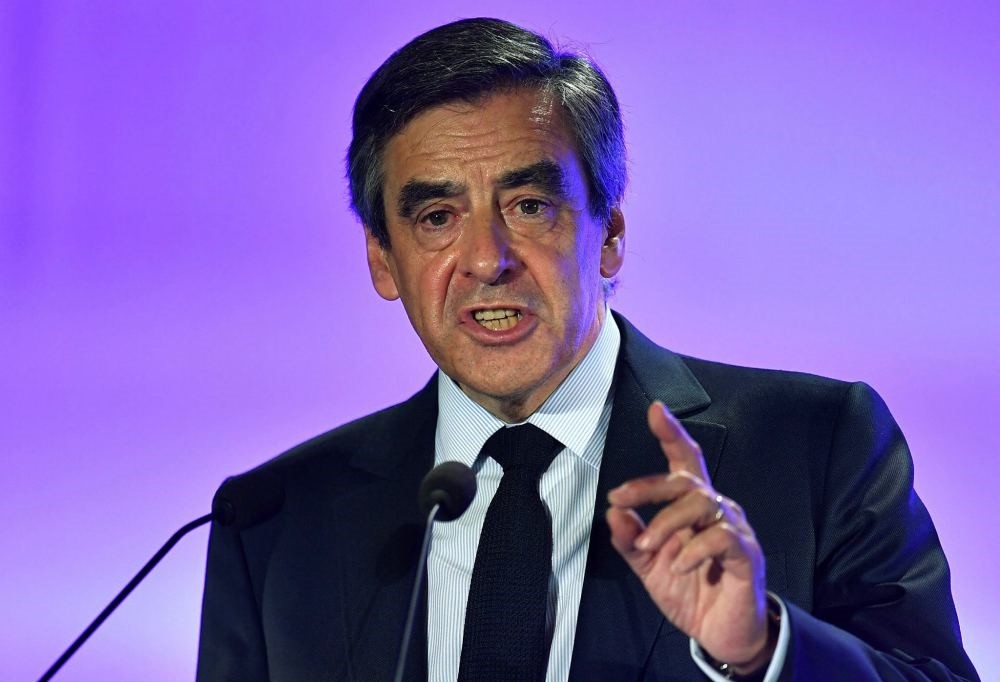 French presidential election candidate for the right-wing Les Republicains party Francois Fillon speaks during a campaign rally on March 2, in Nimes, southern France. (AFP Photo)
by Compiled from Wire Services
Mar 04, 2017 12:00 am
French conservative Francois Fillon's presidential bid has suffered another blow as his spokesman, Thierry Solere, resigned from the campaign team. "I've decided to end my duties as Francois Fillon's spokesman," Thierry Solere said on his Twitter account as Fillon battles to save his campaign, while facing charges in a fake jobs scandal.

Solere's departure on Friday was the latest in a series of defections related to pending corruption charges against Fillon. The campaign treasurer and three legislators from his Republicans party announced Thursday they were quitting, amid growing pressure for Fillon to step down. Pressure has been building on 62-year-old former Prime Minister Fillon since he revealed this week that he will be charged over allegations he paid his wife Penelope hundreds of thousands of euros for fake parliamentary jobs.

France's center-right UDI party announced on Friday it is withdrawing support for Fillon.

Fillon this week promised to fight "to the end" despite the deepening financial scandal over his wife's pay that could see him placed under formal investigation for misuse of public funds later this month.

He has complained of judicial and media bias that amounted to a "political assassination." Several of his former supporters have since deserted him, saying they cannot support him given those attacks on the judiciary.

Veteran French conservative Alain Juppe is ready to step in as a presidential candidate if the beleaguered Francois Fillon pulls out, his entourage said Friday, as the list of deserters from Fillon's camp grew.

The 71-year-old Juppe, also a former prime minister, was beaten by Fillon in the conservative primary in November despite being the clear pre-contest favorite. He has kept out of the campaign since then as far-right candidate Marine Le Pen has taken the lead in opinion polls, and centrist Emmanuel Macron has also benefited from Fillon's woes.

With supporters deserting Fillon by the day and the first round of voting fast approaching on April 23, Juppe is now prepared to take over, a member of his entourage said. Juppe "will not refuse if all the conditions are met - Francois Fillon has to take the decision to pull out himself, and the rightwing and center camps ... have to be united behind him," the unnamed source told AFP. Since his defeat in the primary, Juppe has kept a low profile in the southwest city of Bordeaux where he is mayor. Police raided the Fillon's Paris residence on Thursday, adding to the pressure on him to step aside.

In a scenario where Juppe was to stand in Fillon's place, Odoxa put Juppe in front at 26.5, with Macron at 25 and Le Pen out of the contest at 24 percent. Odoxa did not present a second-round scenario, but daily polls have consistently shown any candidate beating Le Pen in the May 7 second round. Another poll by Opinionway confirmed that scenario, although it still had Le Pen ahead in the first round. There are no recent polls pitting Macron against Juppe in the second round. Earlier on Friday, a lawmaker from Fillon's The Republicans party said a planned demonstration supporting him would go ahead on Sunday and would be an "important moment" in the presidential race. President Francois Hollande said late on Thursday that the rally, near a central Paris square dedicated to human rights, should not go ahead because it amounted to a criticism of France's institutions.