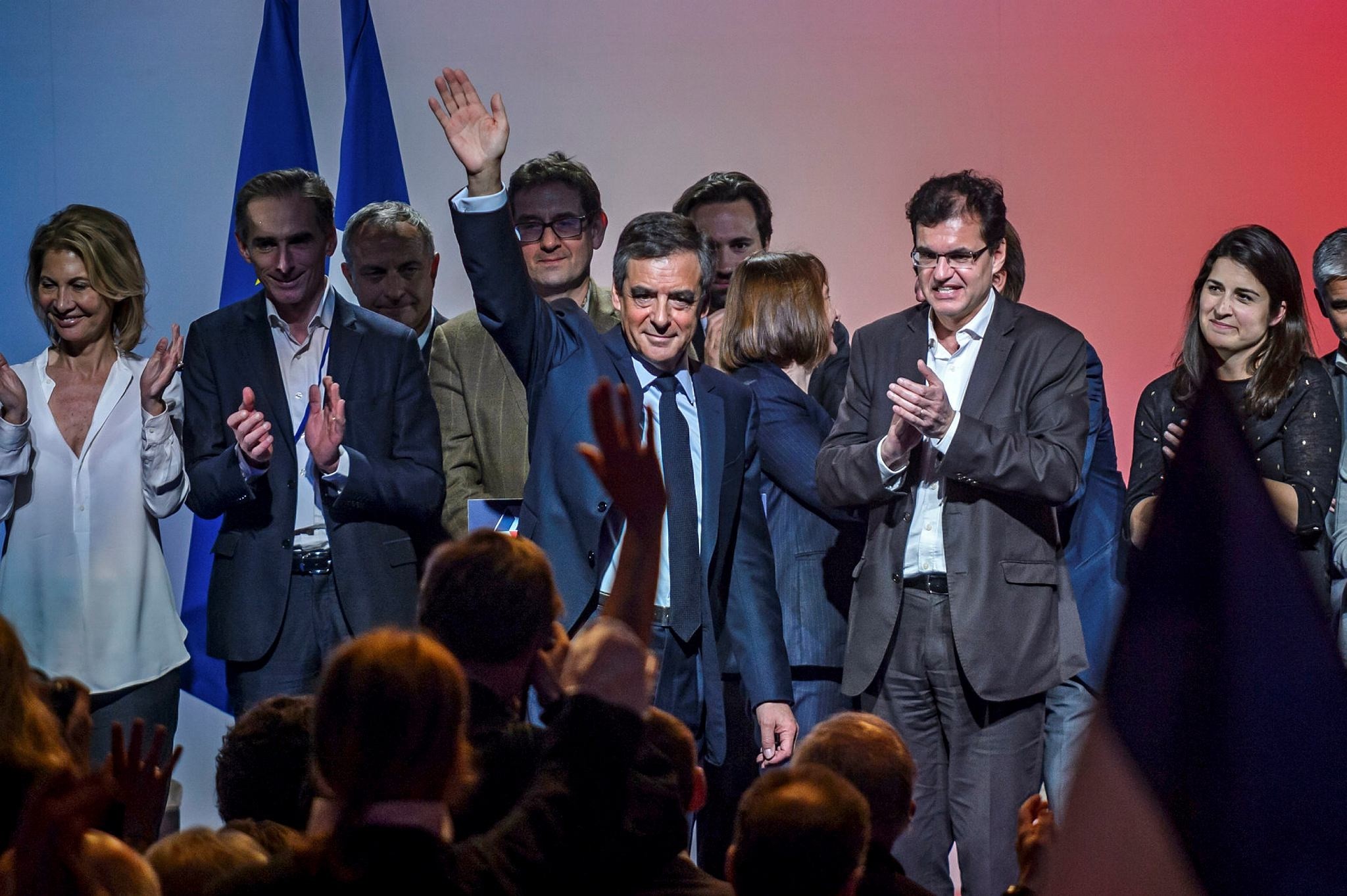 Francois Fillon waves after delivering a speech during a campaign event in Aubervilliers, near Paris, France, 04 March 2017. (EPA Photo)
by Associated Press Mar 04, 2017 12:00 am

French presidential candidate Francois Fillon, fighting for political survival, called on supporters Saturday not to "abdicate" to those trying to destroy him as the Socialist mayor of Paris asked him to cancel a scheduled rally that would test his staying power.

The conservative Fillon, whose campaign has been unraveling over impending corruption charges, vowed to remake France in a speech on Saturday, a day before what amounts to his last stand.

He will hold a rally Sunday near the Eiffel Tower widely seen as a way to measure support via the numbers he can muster. In a video tweeted Friday, Fillon called on his supporters to show up.

Fillon, once the leader in polls, is increasingly alone as backers defect. Two campaign heavyweights, campaign director Patrick Stefanini and campaign spokesman Thierry Solere deserted the Fillon team on Friday — though the director promised to stay on until the end of the rally.

Paris Mayor Anne Hidalgo tweeted that the event "endangers" French values, claiming its real goal is to demonstrate against investigative judges, police and journalists "bringing to light the truth."

"Our ties to liberty force us to denounce this rally as a grave act of moral and political failure, contrary to our values," Hidalgo's tweet said, noting that the event was being held at the Esplanade of Human Rights.

She wasn't the first to denounce the rally, in which a group linked to an ultra-conservative political movement, Common Sense, has "associated" itself.

Financial prosecutors are investigating allegations that Fillon gave his wife and two of their children taxpayer-funded jobs as his parliamentary aides that they never performed. Fillon initially said that he would step down if charged, but decided to maintain his candidacy even though he's been summoned to face charges on March 15.

His family members were paid more than 1 million euros ($1.1 million) over a number of years for work as his parliamentary aides. It is legal in France to hire relatives for public jobs, if they actually work. Fillon proclaims his innocence, insisting his wife and children worked for their pay.

Fillon isn't the only candidate in the firing line of judicial investigators.

Far-right leader Marine Le Pen is at the center of several judicial inquiries along with her anti-immigration National Front party, but unlike Fillon she has refused a summons to appear before investigative judges on March 10 in a case concerning her European parliamentary aides.

And unlike Fillon, Le Pen hasn't suffered in polls. She and independent centrist Emmanuel Macron share first and second place in recent soundings.

In his speech on Saturday, Fillon called liberty the guiding force of his platform, meant to unlock new energy, risk-taking and a new mindset for the French, reducing the role of the state and making success a value.

Fillon wants to slash 500,000 civil servant jobs, reduce by a total of 50 billion euros taxes and charges for small businesses, shops and farmers, "significantly" reduce taxes for companies and end the 35-hour work week, among other measures.

"In the first three months, we'll have created a positive shock and launched the powerful dynamic favoring employment," he said.

Fillon's party, The Republicans, meanwhile, said it was holding a meeting of its political committee on Monday evening to evaluate the situation after Sunday's rally. The committee was initially to meet Tuesday, but the stakes are high and the situation urgent.

With the two-round presidential election set for April 23 and May 7, time is pressing for Fillon and his party, which needs to find a new candidate should Fillon decide, or be forced, to step down.

Former Prime Minister Alain Juppe, now mayor of Bordeaux, is seen by many as a Plan B to replace Fillon, though he has rejected the idea in previous weeks. Juppe was convicted in 2004 for an illegal party funding scheme while serving as finance director at Paris City Hall during Jacques Chirac's tenure as mayor, from 1977 to 1995. He received a 14-month suspended prison sentence on appeal, and was barred from elected office for a year.