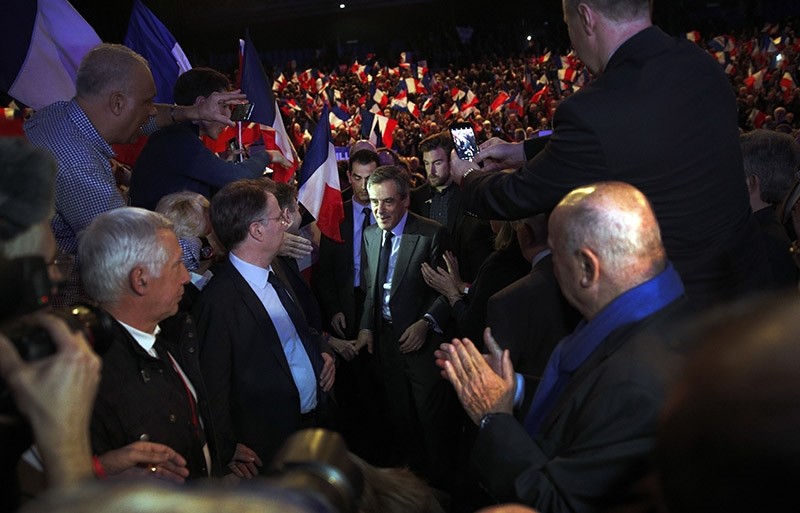 French conservative candidate Francois Fillon appealed Tuesday to centrist allies who deserted him over corruption allegations to return to help him win the spring presidential election.

Speaking in Orleans, south of Paris, the former prime minister "solemnly" asked centrists of the UDI party, which suspended its backing of Fillon last week, to close ranks behind him.

"We have the same values, the same goals and it is together that we can build a government majority to rebuild France," Fillon said as he tried to jump start a campaign that had all but ground to a halt. "We're all patriots. So let us serve the homeland."

Later on the same day, centrist UDI party hinted on Tuesday it could back Francois Fillon's presidential bid, but said it first wanted to see him take concrete steps to unite his much-divided camp.

"We take note of François Fillon's ... decision to continue his campaign and his pledge to take initiatives to bridge divisions with the UDI.... We are waiting to see those initiatives," the UDI's executive committee said.

The statement also said the UDI, a much smaller party than The Republicans, would stick by an electoral deal of alliance with them for the parliamentary elections in June that follow the April-May presidential vote.

Fillon's campaign appearance came a day after his party, The Republicans, announced it was endorsing him anew after days of costly uncertainty.

Less than two months before the April 23 first round of voting, Fillon must now play catch-up while trying to bring back the centrists critical to his victory. The first round's top two finishers will compete in a May 7 runoff.

Once the front-runner of the presidential race, Fillon is now placing a distant third in most polls behind far-right leader Marine Le Pen and independent centrist Emmanuel Macron.

Fillon's political fortunes soured after reports that he had paid his wife and two of his five children more than 1 million euros ($1.1 million) over many years for work as his parliamentary aides that judicial officials suspect they may not have done.

He insists the jobs were not fake, but has been summoned for questioning by judicial investigators on March 15, and risks preliminary charges.

Meanwhile, Le Canard Enchaine newspaper, which divulged the initial claims, reported that Fillon failed to declare a 50,000-euro ($53,000) interest-free loan to the authorities that ensure transparency regarding politicians' pocketbooks.

The loan was made in 2013 by a friend, who reportedly employed Fillon's wife, Penelope, during some of the years being checked by investigators, the newspaper reported.