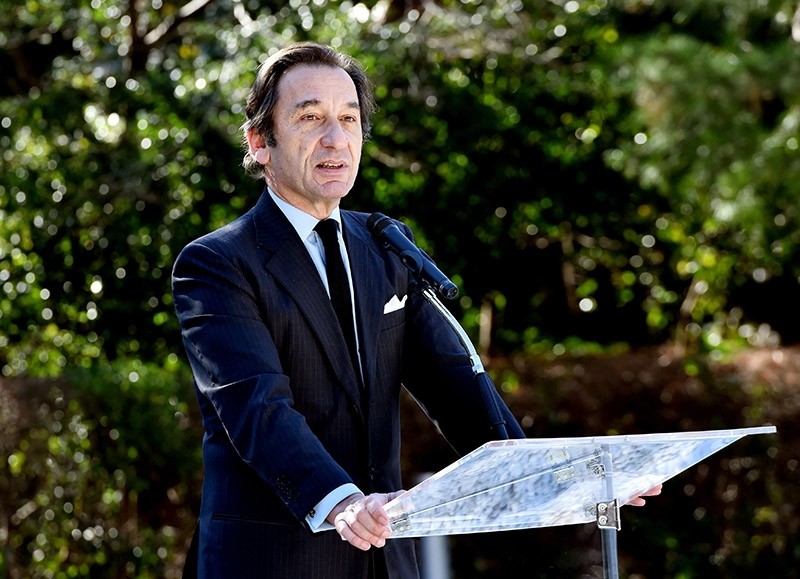 This file photo taken on January 8, 2015 shows French Ambassador to Japan Thierry Dana delivering a at the French ambassador's residence in Tokyo for the Charlie Hebdo attack in Paris that killed 12 people on January 7. (AFP Photo)
by Mar 08, 2017 12:00 am

France's ambassador to Japan has broken diplomatic protocol and stated publicly that he would refuse to serve far-right leader Marine Le Pen if she becomes president, earning approval from his colleague in Washington.

The comments underline growing unease in France's diplomatic corps about the prospect of a Le Pen presidency ahead of a two-stage presidential election on April 23 and May 7.

Though no polls currently show her winning, the anti-immigration nationalist is hoping to emulate the success of US President Donald Trump, who has faced his own problems with rebellious diplomats.

"If the French tragedy comes to pass and leads to her election, I would withdraw from all my diplomatic functions," France's ambassador in Tokyo Thierry Dana, 60, wrote in a column in Le Monde newspaper on Wednesday.

Outspoken ambassador to Washington Gerard Araud praised his colleague for his "excellent article".

Foreign Minister Jean-Marc Ayrault has sent a reminder to all diplomats about the need for "prudence and the principle of neutrality".

"Against the backdrop of rising populism, we need to keep cool heads, or else risk encouraging the rise of demagoguery directed against public servants," he wrote in the memo, a copy of which was seen by AFP.

Le Pen, 48, frequently rails against "the establishment" for trying to sabotage her campaign and has recently accused civil servants of abetting her worsening legal problems.

She faces prosecution for distributing images of Islamic State atrocities over Twitter as well as separate cases over misusing public funds at the European Parliament and campaign financing.

Polls currently suggest 39-year-old centrist Emmanuel Macron is the most likely to win the election, but analysts warn against firm forecasts after a highly unpredictable campaign.