'Politics is not a game,' says UK PM May after Scots make 2nd referendum call 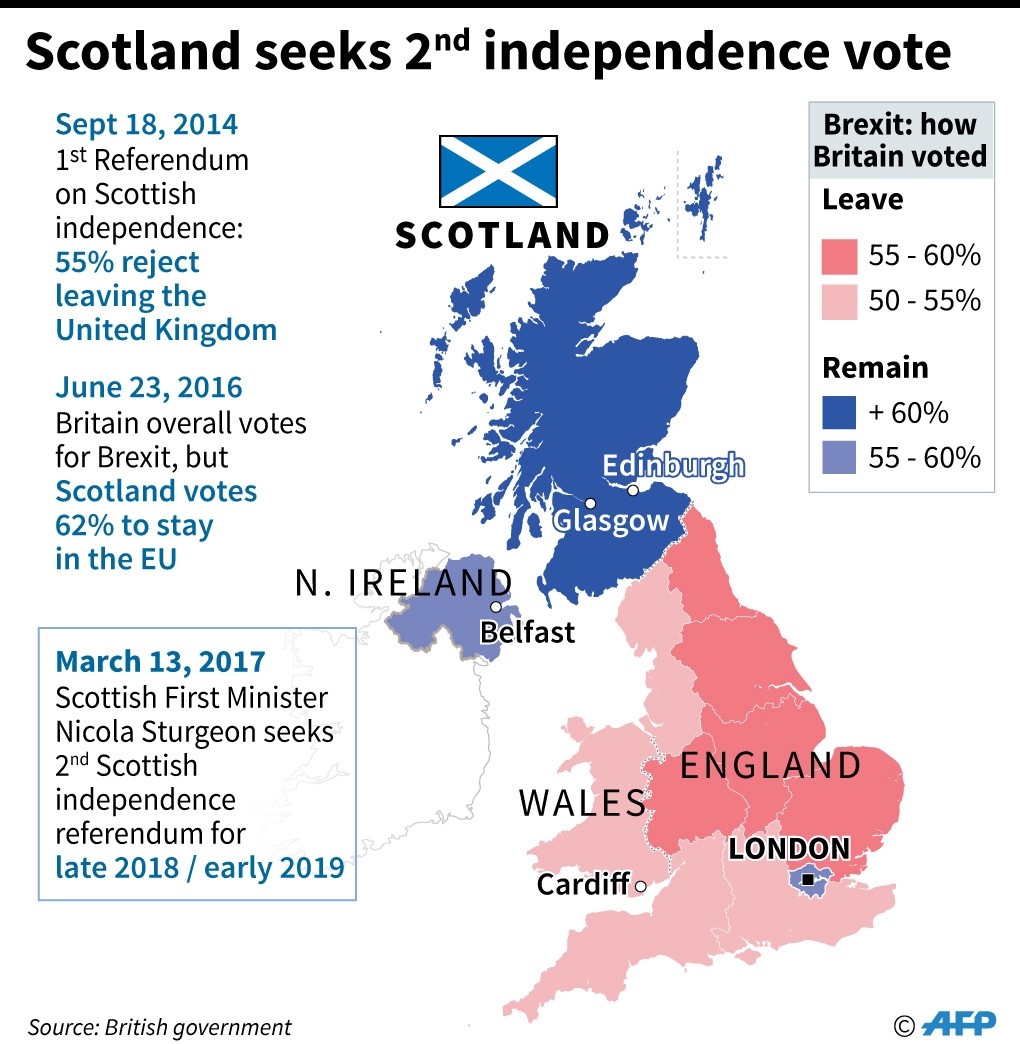 Prime Minister Theresa May chided Scottish leader Nicola Sturgeon for demanding an independence referendum on Monday, saying the Scottish National Party (SNP) had "tunnel vision" on breaking away from the United Kingdom.

"The tunnel vision that SNP has shown today is deeply regrettable," May said. "Instead of playing politics with the future of our country, the Scottish government should focus on delivering good government and public services for the people of Scotland. Politics is not a game."

May'S words come after Scotland's leader delivered a shock twist to Britain's EU exit drama by announcing that she will seek authority to hold a new independence referendum in the next two years because Britain is dragging Scotland out of the EU against its will.

First Minister Nicola Sturgeon said that she would move quickly to give voters a new chance to leave the United Kingdom because Scotland was being forced into a "hard Brexit" that it didn't vote for. Britons decided in a June 23 referendum to leave the EU, but Scots voted by 62 to 38 percent to remain. 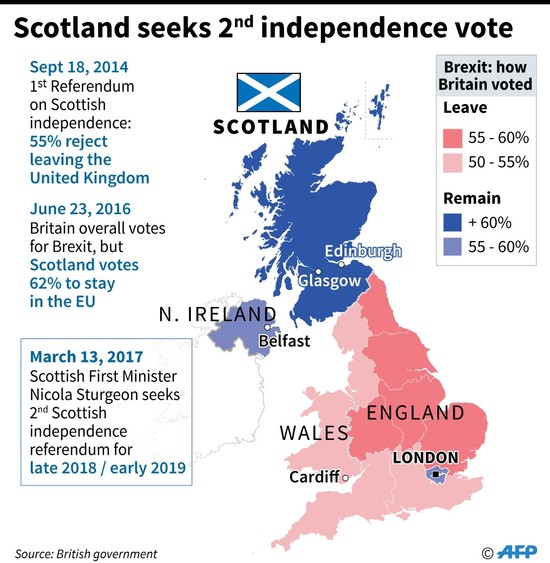 Scotland must not be "taken down a path that we do not want to go down without a choice," Sturgeon said.

Sturgeon spoke in Edinburgh as Britain's Parliament was on the verge of approving a Brexit bill that will allow the U.K. to start the formal withdrawal from the EU within days.

Sturgeon said she would ask the Scottish Parliament next week to start the process of calling a referendum, to be held between the fall of 2018 and the spring of 2019. She said by then, details of Britain's post-Brexit deal with the EU would be clear and Scottish voters would be able to make "an informed choice."

The British government must agree before a legally binding referendum can be held. It didn't say Monday whether it would do so, but said an independence ballot "would be divisive and cause huge economic uncertainty at the worst possible time."

In a 2014 referendum, Scottish voters rejected independence by a margin of 55 percent to 45 percent. But Sturgeon said that the U.K.'s decision to leave the EU had brought about a "material change of circumstances."

Sturgeon said that she had sought compromise with May's government, but had been met with a "brick wall of intransigence."

Sturgeon has been seeking a deal that will allow Scotland to stay in the European single market and customs union. But she said she has become convinced May is pursuing a "hard Brexit" that would leave Britain outside those arrangements, which many U.K. businesses see as crucial.

"I am not turning my back on further discussions should the U.K. government change its mind," she said.

Sturgeon is taking a big gamble. Although the prospect of Brexit has likely boosted support for independence, polls do not indicate it has majority backing. And there is no guarantee that the EU would allow an independent Scotland to remain a member.

Liberal Democrat leader Tim Farron said Scotland could find itself with "the worst of all worlds" — outside both the U.K. and the EU.

Asked whether she would resign if she lost the referendum, Sturgeon said she wasn't planning to lose.

"Sometimes you've got to do what you think it right in politics," she said. "And I think it's right for Scotland to have a choice."