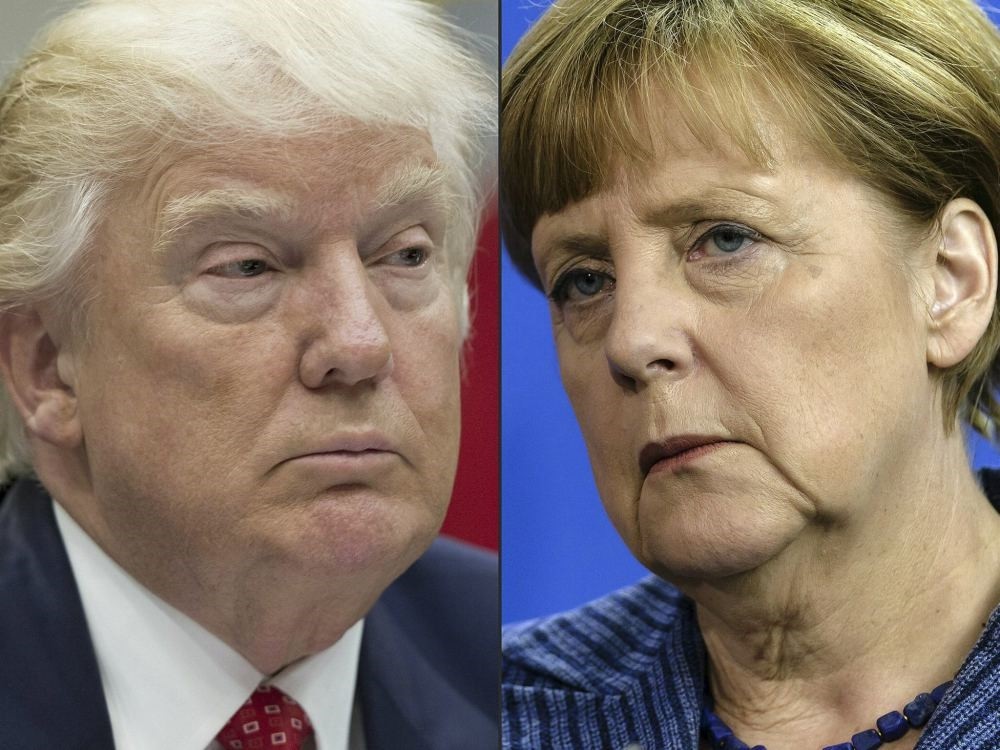 US President Donald Trump and German Chancellor Angela Merkel.
by Compiled from Wire Services Mar 14, 2017 12:00 am

Amid major disagreements in recent months, German Chancellor Merkel and U.S. President Trump meet for the first time at the White House, risking plunging U.S.-Germany relations to a new low

The long-serving German leader Angela Merkel meets U.S. President Donald Trump for the first time today whose arrival in the White House will decide whether the bilateral relationship will be further deteriorated with ongoing clashes.

The German chancellor has taken divergent views from Trump on everything from the role of international organizations to the welcoming of refugees. But for their first meeting, both sides are expected to reduce the potential for conflict. Instead, the building of trust will be Merkel's main goal, her government's coordinator for trans-Atlantic relations said.

"Most important is that she succeeds in making clear that differences of opinion can be spoken on the basis of partnership, but not out of confrontation," Juergen Hardt told DPA news agency.

While former U.S. President Barack Obama had labelled Merkel his "closest international partner," there has been little known contact between the German leader and Trump since he took office. Merkel had a warm relationship with Trump's predecessor Barack Obama, but also developed a strong working relationship with George W Bush, despite major disagreements on the Iraq war and other issues.

During the 2016 U.S. presidential campaign, Trump regularly criticized Merkel for her open-door refugee policy, contrasting it with what he promised would be tighter controls in the United States if he won office. Merkel has been a leading critic of Trump's effort to ban travelers temporarily from seven Muslim-majority nations, a list that has since been pared back to six.

A month after U.S. Vice President Mike Pence delivered a message to Europe underscoring the importance of transatlantic ties, Tuesday's meeting will be scrutinized for clues on whether Trump fully endorses that message.

The reserved German leader herself underlined that she is travelling to Washington not only as Germany's leader, but also as an envoy of the EU. "I will of course point out that for us, our country and our membership in the European Union are two sides of the same coin," Merkel said in Brussels ahead of the visit.

The Washington meeting would also allow for "an exchange of bilateral and international topics, and transatlantic ties, as we have always stressed, are very important," added Merkel's spokeswoman Ulrike Demmer. As in other similar tours, Merkel will be accompanied by an army of business leaders, but this time the delegation faces an uncertain reception as Trump preaches an "America First" policy.

Merkel faces a challenge in September's polls from the left in the form of the resurgent Social Democrats, and from the right-wing populist Alternative for Germany - one of the European parties energized by Trump's win in the United States.

Trump will also be looking to Merkel's experience on the world stage, including in dealing with Russian President Vladimir Putin.

Trump had signaled he would consider a more open relationship with Russia, but has yet to take action amid questions about his campaign's contact with Moscow. Talks will include Germany and France's efforts to address Russia's incursion in Ukraine and what role the US can play. On security and counterterrorism efforts, the White House is looking for areas of cooperation, despite strong differences between Trump and Merkel on how to address the refugee crisis.
RELATED TOPICS