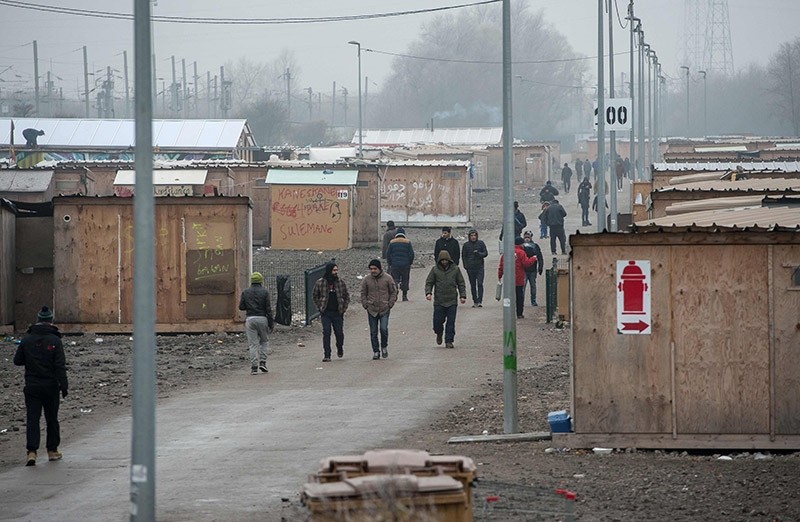 This file photo taken on January 25, 2017 shows migrants walking inside the migrants camp of Grande-Synthe in Grande-Synthe, near Dunkerque, northern France. (AFP Photo)
by French Press Agency - AFP Mar 15, 2017 12:00 am

France said Wednesday that security forces would start dismantling another migrant camp on its northern coast near the port of Dunkirk "as soon as possible" after clashes at the site.

The population of the Grande-Synthe camp has swelled to about 1,400 to 1,500 people since the destruction last October of the squalid "Jungle" camp near Calais, about 40 kilometers (25 miles) away.

"It's no longer just a question of re-establishing public order" in the camp, Interior Minister Bruno Le Roux told a hearing at the French Senate.

France will proceed with a "progressive dismantling of the camp which should start as soon as possible," he said, adding that "we can't let things continue like this."

For more than a decade France's northern coast has been a magnet for refugees and migrants trying to reach Britain, with French authorities repeatedly tearing down camps in the region.

The Grande-Synthe camp, populated mostly by Kurds at present, was built by the humanitarian group Doctors Without Borders (MSF) to house migrants and refugees who otherwise sleep in tents or makeshift shelters.

They gather along the northern coast in France seeking to break into trucks heading to Britain or pay smugglers to help them get across the Channel.

Police intervened at the camp after five men were injured in a fight at the start of the month. Another man was stabbed in November.

Several thousands of people from the Jungle were sent to accommodation around France last October, leading to fierce criticism from the far-right National Front party and other groups.

The Socialist government, which is determined to try to stop another camp from springing up in Calais, has criticized Britain for reneging on a deal to resettle hundreds of underage migrants from the camp.