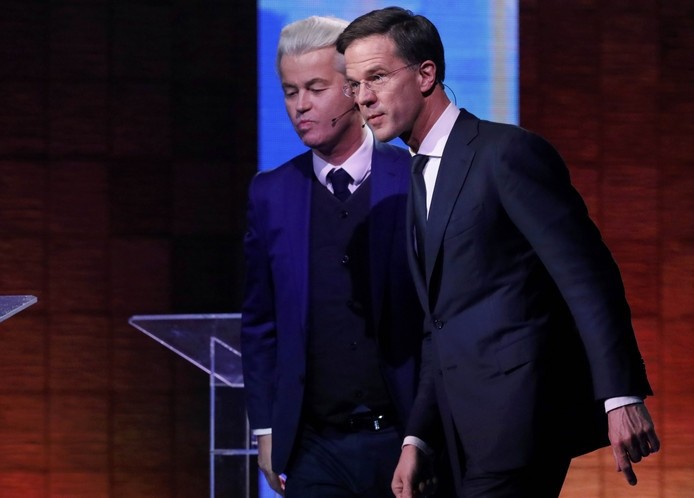 Wilders (L) and Rutte (Reuters Photo)
by Daily Sabah with Wires Mar 15, 2017 12:00 am
Netherlands' main exit poll suggests that Islamophobic and xenophobic candidate Geert Wilders had an unexpectedly poor showing in the elections while liberal Mark Rutte seems to be on track to winning the elections.

The Liberal party of Dutch Prime Minister Rutte is set to win the most seats in Wednesday's elections, forcing anti-Islam firebrand Wilders into second place along with two other parties, exit polls predicted.

Public broadcaster NOS said the VVD would take 31 seats in the next 150-seat parliament, with Wilders and his Freedom Party returning with 19 MPs, the same number as the Christian Democratic Appeal and the Democracy party D66.

Actual results are expected by midnight.

Geert Wilders' populist rhetoric was expected to garner more votes after Netherlands - Turkey row which led to a diplomatic crisis as Turkish Family and Social Affairs Minister Fatma Betül Sayan Kaya was declared "undesirable alien" and wasn't allowed to enter the Turkish consulate in Rotterdam, which is, according to international laws, considered Turkish territory. The tensions between the two NATO allies increased even more after the Turkish chargé d'affaires in The Hague and Rotterdam consul general were detained. After Netherlands' controversial move, PM Rutte has apologized to his Turkish counterpart Binali Yıldırım for the detentions.
Last Update: Mar 15, 2017 11:42 pm
RELATED TOPICS