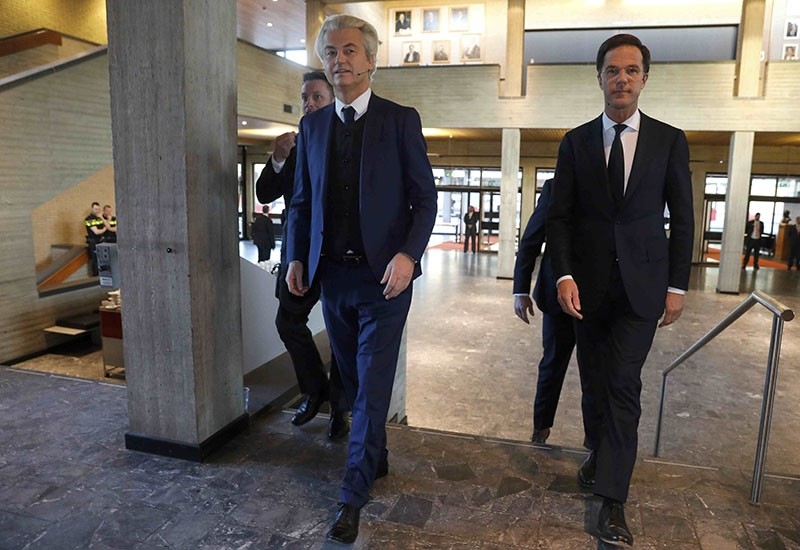 Prime Minister Mark Rutte has emerged the clear leader in Dutch parliamentary elections early Thursday and is set to lead talks to form his third successive coalition government since 2010.

With 95 percent of the votes counted, Rutte's Party for Freedom and Democracy (VVD) was on 33 seats in the 150-member lower house, well ahead of populist leader Geert Wilders' Party for Freedom (PVV) on 20 seats.

Two parties were in third place on 19 seats - the Christian Democrats(CDA) and the centrist D 66.

Behind them were the Socialist Party (SP) and Green Left, both on 14. Turnout was high at a predicted 79 percent, up from 75 percent in2012.

"After Brexit and after the elections in the United States, a halt to the wrong sort of populism has been called," Rutte told cheering VVD supporters after the results of the exit poll had been announced.

Wilders congratulated Rutte, but also said "Rutte is not rid of me by any means." He thanked his supporters and celebrated his party's forecast win of 19 seats, a gain of five from 2012.

"We are one of the winners of this vote, but of course I would have liked to have been the leading party," the PVV leader told reporters, adding that he had hoped to win 30 seats.

The big loser was Rutte's coalition partner, the Labor Party (PvdA), which is on track to suffer one of the worst results in its history, predicted to pick up only 9 seats, down from 38 seats in 2012.

Rutte's VVD saw a sharp decline in its support from 41 seats five years ago, despite guiding the country through the worst of the economic crisis. During the campaign, even opposition parties acknowledged that the economy was back on track.

Party leaders are reported to have scheduled a meeting with the chairperson of the lower house, Khadija Arib, to decide on how to proceed in coalition talks.

A so-called "informateur" - a senior politician enjoying broad respect - will be appointed to scout out the possibilities, but there was no doubt in The Hague that he or she would ask Rutte to lead the process.

Given the election arithmetic, and the fact that Rutte has completely rejected cooperation with Wilders, the process is likely to be drawn out.

Hollande, near the end of his five-year term, on Thursday congratulated Rutte on the centre-right premier's unexpectedly sizeable score and lead over Wilders in a Dutch election closely watched by Europe ahead of France's presidential ballot.

"The President warmly congratulates Mark Rutte for his clear victory against extremism," Socialist politician Hollande said in a statement.