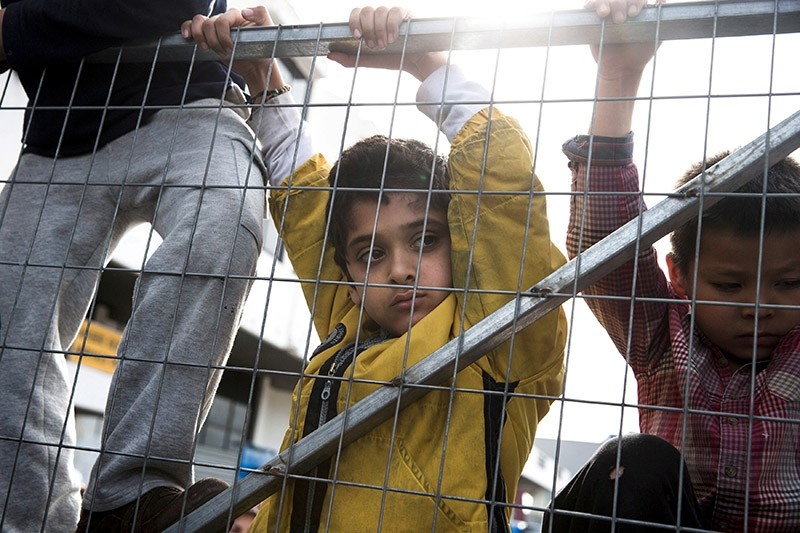 Children climb at the entrance of the refugee camp at the disused Hellenikon airport, blocked by protesting refugees and migrants, most of them Afghans, in Athens, Greece, February 6, 2017. (Reuters Photo)
by Mar 16, 2017 12:00 am

Children stuck in Greek migrant camps are cutting themselves, attempting suicide and using drugs to cope with "endless misery," international charity Save the Children said on Thursday.

Reuters obtained an advance copy of a report that marks one year since the European Union struck a deal with Turkey to stem the flow of refugees and migrants to Greek islands.

"Their mental health is rapidly deteriorating due to the conditions created as a result of this deal," the report said, adding conditions in Greek camps had led to a rise in self-harm, aggression, anxiety and depression.

"One of the most shocking and appalling developments Save the Children staff have witnessed is the increase in suicide attempts and self-harm amongst children as young as nine."

One 12-year-old boy filmed his suicide attempt after witnessing others trying to end their lives, it said.

In 2015, a million refugees and migrants from Syria, Iraq, Afghanistan and beyond reached Europe, crossing over to Greek islands from Turkey. The flow has all but stopped since the EU-Ankara deal came into force on March 20, 2016.

Under the deal, anyone who crosses into Greece without documents can be deported to Turkey unless they qualify for asylum in Greece. But long asylum procedures and a huge backlog have stranded 14,000 asylum seekers on five Greek islands, double the capacity.

Save the Children described conditions in overcrowded camps as "degrading" and "detention-like", forcing asylum-seekers to fight for basic necessities such as blankets, a dry place to sleep, food, warm water and access to healthcare.

"The living conditions have made them lose hope and made them feel like animals and objects - not exactly human, but inferior human beings," the report quoted a staff member of Praksis, its partner organization, as saying.

Children had lost all hope that they will leave Greece and became impatient as well as verbally and physically aggressive, it said. Others turned to drugs as a way of coping.

"The conditions are turning children from young people who are calm and full of dreams to people who want to harm property, others and themselves," another Praksis member was quoted as saying.

"They say that they feel bad, then someone offers them a pill and promises it will make them feel better, and then it does and they start taking drugs."