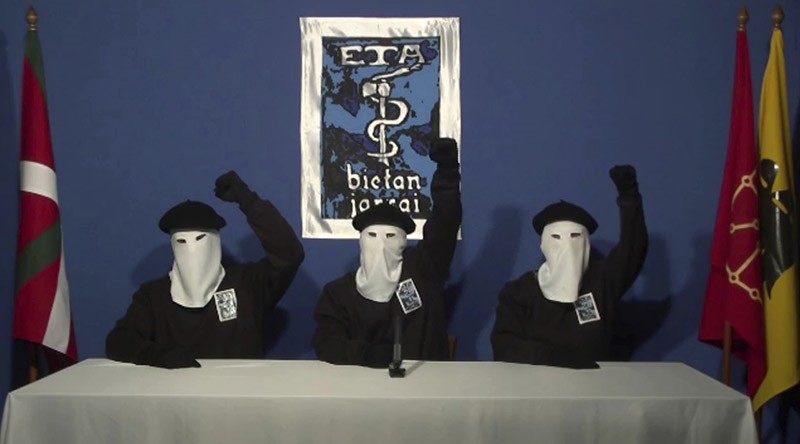 In this file image made from video provided on Oct. 20, 2011, masked members of the Basque separatist group ETA hold up their fists in unison following a news conference at an unknown location. (AP Photo)
by Mar 17, 2017 12:00 am

The Basque government said regional leader Inigo Urkullu was due to comment on the news at 2 p.m. (1300 GMT). Spain's Interior Ministry declined to comment.

"ETA has handed us responsibility for the disarmament of its arsenal and, as of the evening of April 8, ETA will have completely handed over its weapons," Txetx Etcheverry, an activist with environmental campaign group Bizi, was quoted as saying in Le Monde. Bizi is a pro-Basque independence association.

ETA, which has killed more than 800 people over several decades through bombings and assassinations, called a unilateral ceasefire in 2011 and has pledged to turn in its weapons, though a full handover has not yet happened.

The group has been severely weakened in recent years after hundreds of its members, including its leader, were arrested and police seized several of its weapons stashes.

ETA was formed in the late 1950s during the dictatorship of Francisco Franco with the aim of establishing an independent Basque state in northern Spain and southern France.