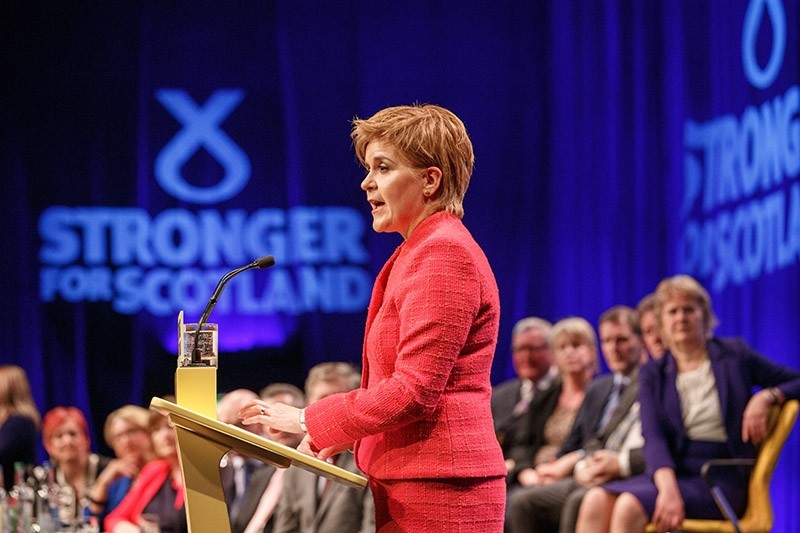 First Minister Nicola Sturgeon insisted Saturday that Scotland will have another referendum on seceding from the UK, as she blasted British Prime Minister Theresa May.

At a raucous rally of her leftwing Scottish National Party (SNP), Sturgeon said May's center-right Conservatives were "terrified" of how Scotland would vote in a second referendum on independence.

Sturgeon said the will of the semi-autonomous Scottish Parliament "must prevail" as she seeks a new referendum before Britain leaves the European Union.

"After the terms of Brexit are clear but while there is still an opportunity to change course, the people of Scotland will have a choice," she told the SNP conference in the oil city of Aberdeen on the northeast coast.

"There will be an independence referendum," she said to huge cheers.

"Scotland should not be dragged out of Europe by a Tory government intent on a disastrous hard Brexit.

"They are now terrified of the verdict of the Scottish people."

Sturgeon caught the British government off-guard on Monday when she demanded a new referendum by early 2019 at the latest, just before the UK is expected to leave the EU.

But May hit back, saying "now is not the time" for another referendum, arguing all energies should be devoted to getting a good Brexit deal for the UK as a whole.

Sturgeon will ask the Scottish Parliament on Wednesday for its approval to ask the British government for the power to call another referendum.

The SNP runs a minority administration in Edinburgh but the leftwing Greens have pledged their support, which would give Sturgeon enough votes for a majority.

"If a new referendum is to happen, it should come about by the will of the people, and not be driven by calculations of party political advantage," the Greens' manifesto says.

"In such a referendum, the Scottish Greens will campaign for independence."

In Scotland's 2014 plebiscite, 55 percent backed staying in the UK. But the SNP says the political landscape has dramatically changed since then, requiring another vote within the next two years.

Sturgeon said if May was concerned about the timing, she was happy to have a discussion on the date -- "within reason".

"The people of Scotland have a right to take their future into their own hands," 70-year-old SNP member Tony Martin told AFP.

"We don't want to go down on the Good Ship Brexit," he said.

In last year's referendum on EU membership, 62 percent in Scotland voted for Britain to remain in the bloc, but across the whole kingdom, 52 percent backed Brexit.

In a speech to her Conservative Party on Friday, May accused the SNP of "tunnel vision" and "obsessive nationalism".

"It is now clear that using Brexit as the pretext to engineer a second independence referendum has been the SNP's sole objective," she said.

As the debate heats up, former Prime Minister Gordon Brown on Saturday waded in with a compromise solution: grant Scotland sweeping new autonomy, such as the power to set sales tax and to sign international treaties.

Control over agriculture, fisheries and environmental regulation -- currently areas under EU control -- would be handed to Scotland as Britain leaves the EU, he said.

The Scot, who is from the main opposition Labour Party, said this was would be "a patriotic Scottish way" to avoid both "die-hard conservatism" and "hardline nationalism".

Scotland's relationship with the EU is at the forefront of the SNP's renewed call for independence, although EU officials have indicated it would have to reapply to join the bloc rather than inherit Britain's membership.

But the SNP is also banking on a growing desire for independence.

According to the latest annual ScotCen Scottish Social Attitudes survey released on Wednesday, 46 percent of Scottish voters now back leaving the UK -- a record high.

"Last time a lot of people voted for the status quo and against the unknown, but this time there is no status quo," said 58-year-old SNP member Paul Wright.