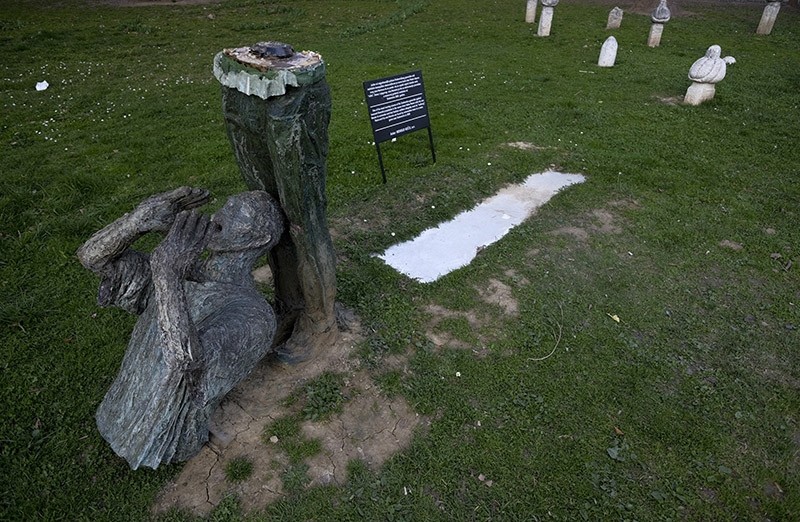 A statue symbolizing a father and son, who were killed by Serbian soldiers during the Bosnian War, has been vandalized in Bosnia and Herzegovina's Sarajevo.

According to the Sarajevo Police Department, the memorial was split into half by a 1994 born Croatian citizen, who was detained after the attack.

Bosniak artist Mensud Keco sculptured the "Nermin Come" statue in 2015, which was erected in a park in Sarajevo's city center in memory of Srebrenica war victims.

The statue depicts father Osmanovic calling for his son Nermin, who were both killed by Serbs in Srebrenica, a UN-declared "safe area" where Dutch soldiers failed to prevent a massacre.

At least 100,000 were killed all over Bosnia and Herzegovina during the Bosnian War between 1992 and 1995, more than 80 percent of whom were Muslim Bosniaks from and around the town of Srebrenica.

The Srebrenica massacre, during which mass rape and killings took place, is the only genocide incident recognized by an international court.

During the Srebrenica massacre in the country, infrastructure and buildings bearing cultural and religious symbols, such as mosques, libraries, and monuments were also destroyed by Serb forces.

The bodies of many killed during the mass murders are still missing as the Serb forces buried them in mass graves, arbitrarily.