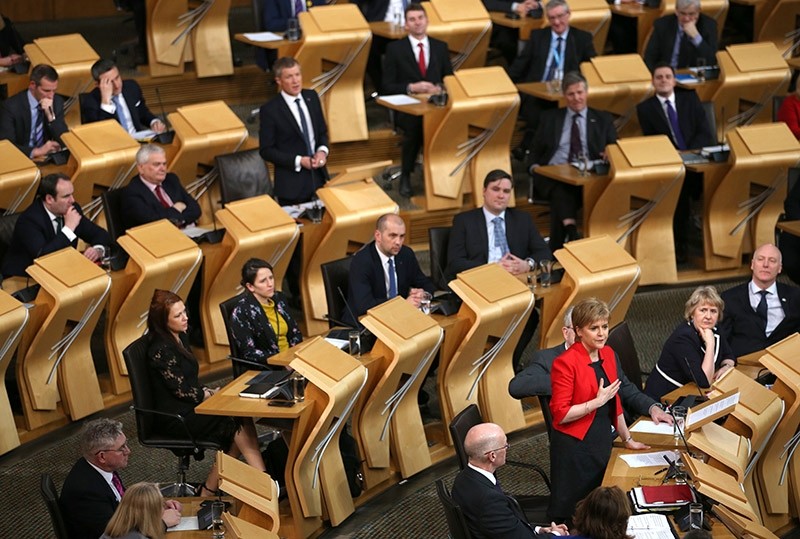 Scotland's First Minister Nicola Sturgeon speaks in the chamber on the first day of the 'Scotland's Choice' debate at the Scottish Parliament in Edinburgh on March 21, 2017. (AFP Photo)
by Compiled from Wire Services Mar 22, 2017 12:00 am

Sturgeon, who leads the Scottish National Party (SNP), asked the parliament to approve her plan after complaining that her efforts to seek a compromise over Britain's exit from the European Union were met with a "hardline response" from Prime Minister Theresa May's Conservative government.

The five parties represented in the parliament have all announced how they plan to vote on the referendum plan and no dissent is expected.

The SNP runs a minority government with 63 of the 129 seats in parliament.

The SNP and the Scottish Green Party, which holds six seats, both back the referendum plan, meaning it should pass with a comfortable majority.

"It's a step that is clearly needed if we're to give Scottish voters a choice about their own future," Ross Greer, a Green lawmaker, said ahead of the debate.

The Conservatives, Labour and the Liberal Democrats - with a combined 59 seats - have all vowed to vote against holding a second referendum.

After Sturgeon announced her plan last week, May's government said a second independence referendum "would be divisive and cause huge economic uncertainty at the worst possible time."

Despite Sturgeon's ardent support for a second referendum, current polls show she may not win a vote.

The survey also found a rise in euroscepticism, from 40 percent in 1999 to 67 percent last year, which could prove challenging to the pro-EU strategy underpinning the SNP's referendum campaign.

Sturgeon has warned that leaving the European single market would cost Scotland tens of thousands of jobs, although voting for independence would not necessarily maintain Edinburgh's access.

EU officials have indicated an independent Scotland would have to reapply to join the bloc, rather than inherit Britain's membership once it leaves the union.

Despite uncertainty hanging over Scotland's place in the Brexit era, Sturgeon on Saturday remained unwavering in her fight for a new referendum.

"Scotland should not be dragged out of Europe by a Tory government intent on a disastrous hard Brexit.

"They are now terrified of the verdict of the Scottish people," she told supporters in the city of Aberdeen.