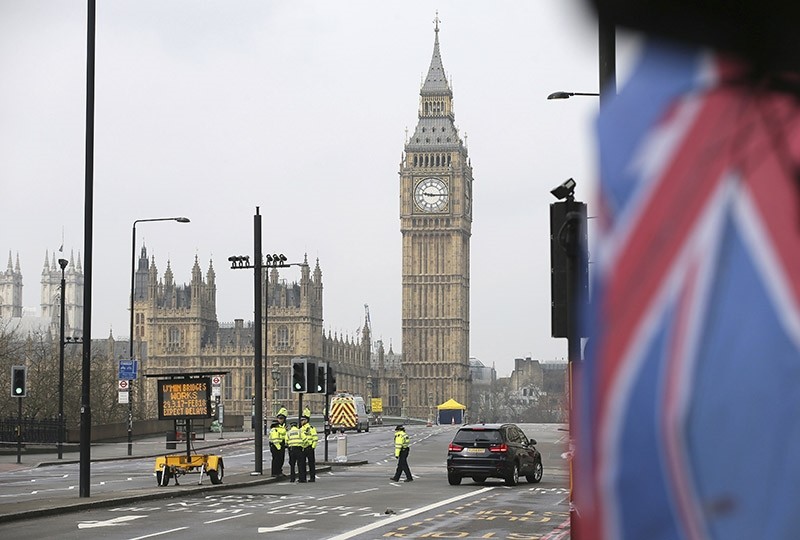 Police work at Westminster Bridge with the Houses of Parliament in background, in London, Thursday March 23, 2017. (AP Photo)
by Compiled from Wire Services Mar 23, 2017 12:00 am

Daesh terrorist group claimed responsibility for London terror attack killing four people and injuring 40 others on the Westminster Bridge and outside the UK Parliament, according to the terrorist group's affiliated Amaq News Agency.

"The perpetrator of yesterday's attack in front of the British parliament was a soldier of the Islamic State and the operation was carried out in response to calls to target coalition countries," Amaq said citing a "security source."

It added that the person "carried out the operation in response to calls for targeting citizens of the coalition."

A knife-wielding man went on a deadly rampage in the heart of Britain's seat of power Wednesday, plowing a car into pedestrians on London's Westminster Bridge before stabbing a police officer to death inside the gates of Parliament. Four people were killed, including the assailant, and 40 others were injured in the London terror attack.

Lawmakers, lords, staff and visitors were locked down after the man was shot by police within the perimeter of Parliament, just yards (meters) from entrances to the building itself and in the shadow of the iconic Big Ben clock tower. The attacker died, as did three pedestrians on the bridge, and the police officer.

Daesh has called on its supporters to carry out attacks against citizens of the U.S.-led coalition that has been targeting the group since 2014.

Daesh, who have been responsible for numerous bloody attacks around the globe, have also previously claimed certain attacks in a show of opportunism. Britain's government has not identified the suspect.

However, the attack coincided with the first anniversary Daesh-linked Brussels bombings in March 22, 2016, in which 32 people were killed and over 340 others were injured.