Warehouse holding 138,000 tonnes of ammunition on fire in Ukraine 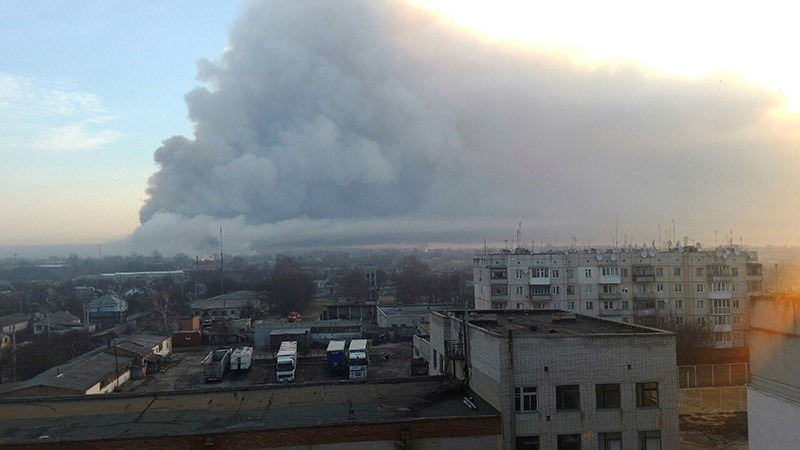 Smoke rises over a warehouse storing tank ammunition at a military base in the town of Balakleya, Kharkiv region, Ukraine, March 23, 2017. (State Emergency Service of Ukraine/Handout via Reuters)
by Mar 23, 2017 12:00 am

The Ukrainian military said unknown saboteurs blew up a warehouse storing tank ammunition at a military base in the east of the country early on Thursday, but nobody was hurt.

The base, which contained about 138,000 tonnes of ammunition, is located in the city of Balakleya about 100 km (60 miles) from the frontline of Ukraine's war against Russian-backed separatists.

Rescue teams were evacuating nearby villages in the eastern Kharkiv region, the military said.

"According to preliminary data ... as a result of sabotage, last night at 2.46 AM (0046 GMT), fire and explosions caused the detonation of ammunition at several sites storing rockets and artillery weapons," Ukraine's chief military prosecutor Anatoly Matios wrote on Facebook.

Military spokesman Oleksander Motuzyanyk said security around other bases was being beefed up. Ukrainian Prime Minister Volodymyr Groysman was due to fly to the area later on Thursday.

Saboteurs previously tried to destroy the same base using drones in 2015, another military spokesman, Yuzef Venskovich, told the 112 TV channel.

More than 10,000 people have been killed in the conflict between Ukraine and the separatist rebels since 2014.