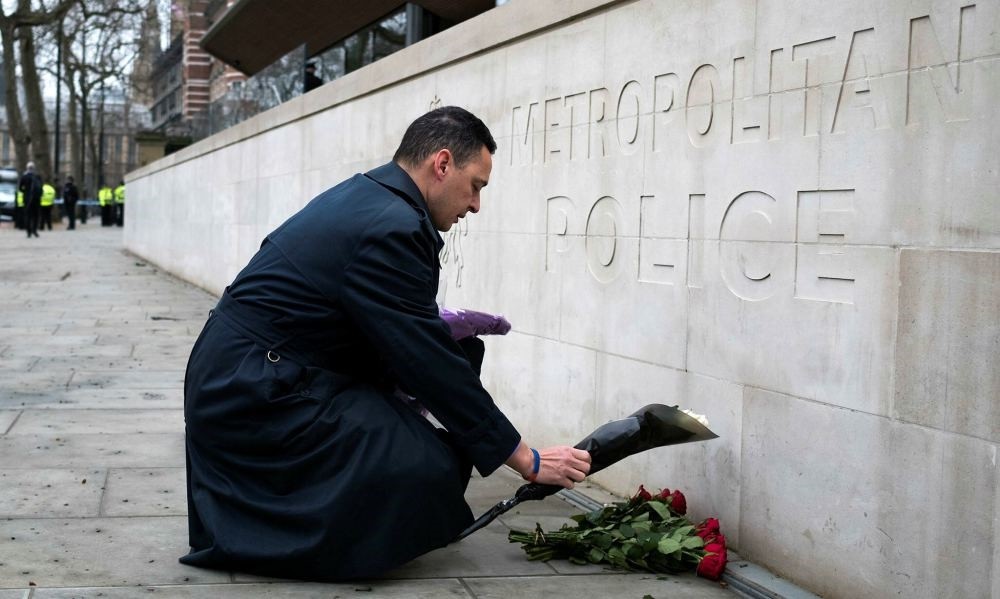 A member of the public lays flowers outside New Scotland Yard in central London, Britain, March 23.
by Daily Sabah with Wires Mar 24, 2017 12:00 am

World leaders have unanimously condemned Wednesday's terror attack that struck the heart of London before the attacker was shot dead by armed police, with international figures saying they side with the U.K.

After a bloody lone-wolf attack in Westminster on Wednesday, leaders from around the world have offered their condolences and expressions of sympathy in the wake of the carnage. The London attack came one year to the day of coordinated terrorist attacks in Brussels that left 32 people killed and more than 320 injured. Hundreds of additional police officers were on patrol as officers worked around the clock to piece together what happened in the deadliest attack to strike the U.K. since four suicide bombers killed 52 people on London's transport system in July 2005. The British flag was flown over parliament at half-mast as a national sign of mourning.

President Recep Tayyip Erdoğan and Prime Minister Binali Yıldırım strongly condemned the London terror attack while urging the international community to avoid the use of double standards in the counter-terrorism fight.

President Erdoğan spoke on the phone with British Prime Minister yesterday. Conveying his condolences to British PM, Erdoğan stated that Turkey is in complete solidarity with the U.K. to fight against terrorism which threatens international peace and security.

In a letter of condolence sent to British Prime Minister Theresa May, President Erdoğan said that Turkey empathizes with the U.K., sharing in its pain.

"Turkey stands in solidarity with [our] ally the U.K. in the fight against terrorism, which poses one of the biggest threats to international peace and security," Erdoğan said, while expressing his condolences and wishing a speedy recovery to those who were injured.

Prime Minister Yıldırım said that "Terrorism is a global catastrophe," adding that Istanbul is as safe as London is and Ankara is as safe as Paris.

Yıldırım highlighted that it is necessary for the international community to unite in the fight against terrorism without labeling it.

"Today some people refer to Daesh terrorism as 'Islamist terror' and this bothers us because the religion of Islam cannot be associated with terrorism," the prime minister said, noting that associating religion with terror is nothing but a double standard.

"We condemn in the strongest terms the terrorist attacks outside of the British Parliament in Westminster, London," Çavuşoğlu said, adding that Turkey and the Turkish people share the sorrow of the U.K. and its people.

EU Affairs Minister Ömer Çelik also condemned the attack, saying that he sent a message of solidarity to the U.K. Minister for Europe Alan Duncan. Çelik continued by saying that terrorism threatens all countries and that all terrorist groups and organizations must be fought against indiscriminately. "The forces of terror are acting more and more cunningly and cynically," President Vladimir Putin said in a statement, adding that "A real uniting of the efforts of all members of the international community" was needed to combat extremism.

The White House pledged, "The full support of the U.S. government in responding to the attack and bringing those who are responsible to justice," spokesman Sean Spicer said.

President Francois Hollande sent a message of "support to the British people" after the attack, in which three French high school students were wounded. The lights of the Eiffel Tower were switched off at midnight in a tribute to the victims.

Far-right leader Marine Le Pen on Thursday said the lone-wolf attack outside parliament in London underscored the need for tighter border security, as France shuddered at an incident that reopened old wounds inflicted by similar assaults at home. Security is a major campaign issue ahead of next month's tight presidential election, in which Le Pen is seen reaching the second round on a nationalist, anti-immigration platform.

The man behind the London terror attack was born in the U.K. and had been investigated for violent extremism "some years ago" by the MI5 intelligence service, Prime Minister Theresa May said yesterday.

"The man was British born and. ...some years ago he was once investigated by the MI5 in regards to concerns about violent extremism," she told parliament, adding: "He was not part of the current intelligence picture."
RELATED TOPICS