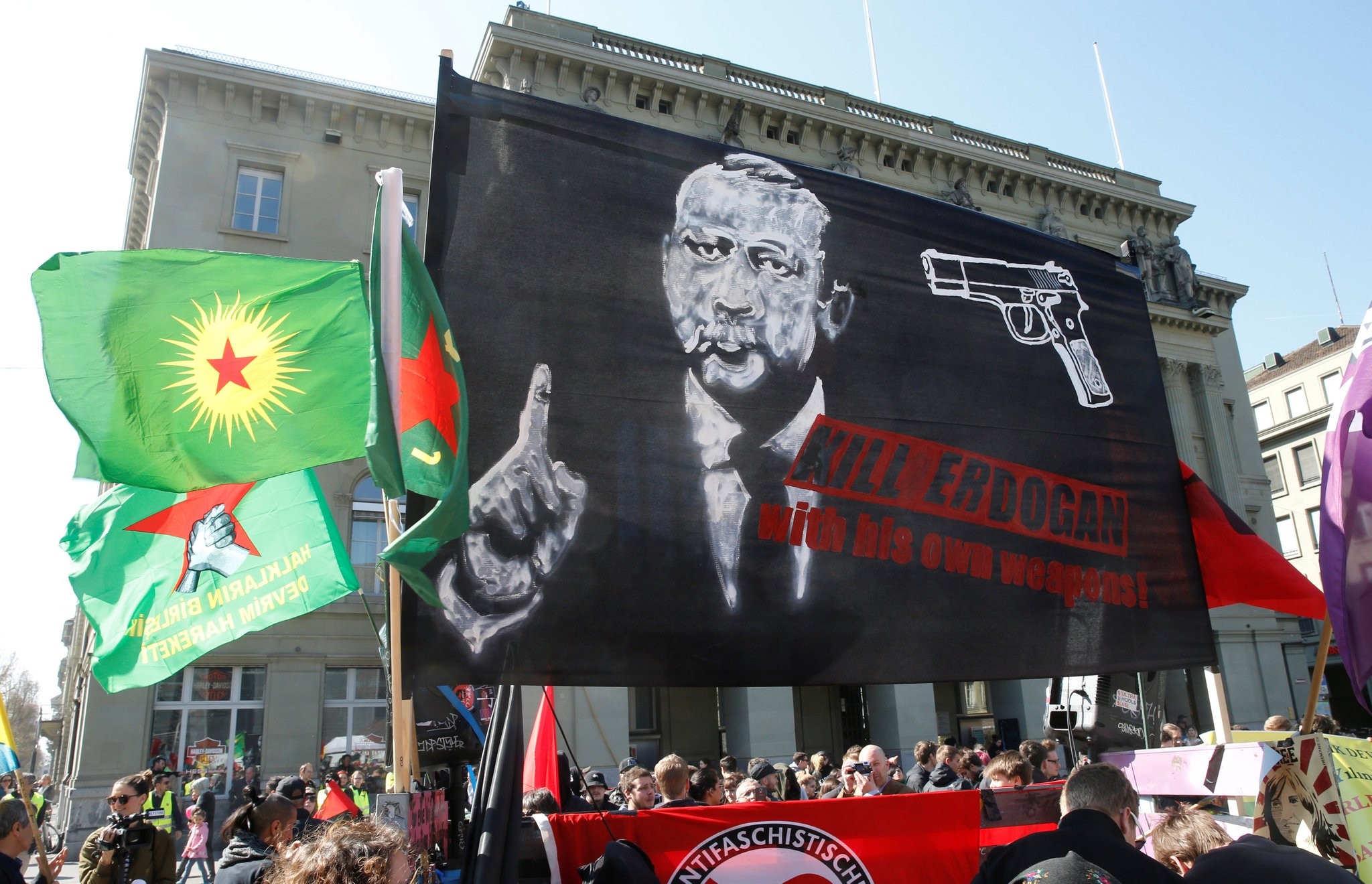 As a wave of anti-Turkey sentiment becomes a familiar theme in the EU amid rising populism, another anti-Erdoğan protest clearly advocating violence took place right in the heart of Switzerland.

Around 250 PKK followers and some socialist parties gathered in front of the Parliament building in Swiss capital Bern on Saturday to stage a rally against Turkish President Recep Tayyip Erdoğan and to promote a "No" vote in an April referendum on constitutional amendments that will introduce a switch to a presidential system. The Swiss Green Party also supported the rally.

The protesters were seen holding placards saying "Kill Erdoğan", and demonstrating against the "Yes" side of the referendum.

Feleknas Uca, a member of the pro-PKK Peoples' Democratic Party (HDP) also made a speech at the protest, urging Turks to vote 'No' in the referendum.

Campaign against the constitutional reform with the slogan "Kill Erdoğan", in front of the Parliament in Bern at the moment pic.twitter.com/n8GLAxA4H0

Turkey's Foreign Ministry summoned Saturday the Swiss counsellor in Ankara over the rally in Bern. A Turkish official, who spoke on condition of anonymity due to restrictions on talking to media, said that the Turkish Foreign Ministry protested the rally held by PKK supporters.

The ministry has conveyed Turkey's reaction to the deputy chief of mission of Switzerland in Ankara because the ambassador, Walter Haffner, was out of the city, the official said.

Haffner will be called to the ministry tomorrow (Sunday), the official added.

President Erdoğan also lashed out at the hateful protest. Speaking Saturday at a Turkish-U.K. forum in the southern city of Antalya, Erdoğan said, "So just today, at the Swiss Parliament extreme terror organizations were holding banners - I repeat, (in front of) the Parliament- with a photo of me on it, pointing a gun to my head... in Switzerland. There are many others [like this]."

However, the event is not the first anti-Turkey and pro-"No" protest in the country.

Basel's annual Morgestraich carnival held on the first week of March had also featured lanterns depicting controversial cartoons of Turkish people and President Erdoğan, in a jab at Erdoğan supporters and "Yes" voters in the upcoming April 16 referendum in Turkey.

On March 13, Swiss newspaper Blick set aside its entire first page to address the Turkish community in Switzerland, urging them to back the "No" campaign while using a controversial headline: "Vote no against Erdoğan's dictatorship."

Following the bans on Turkish ministers in the Netherlands and in Germany, the Zurich city council demanded that the federal government cancel the meeting with Turkish Foreign Minister Mevlüt Çavuşoğlu scheduled for Sunday, March 12.

PKK rallies are also not uncommon in European countries. Despite being listed as a terrorist organization by Turkey, the U.S., and the EU, the terror group has remained active in Europe, spreading its propaganda and increasing its recruitment since 2015, according to a report by the EU police agency Europol. The report stated that the PKK's financial activities still continue in Austria, Belgium, France, Germany, Greece, Romania, Sweden, Switzerland and the Netherlands.