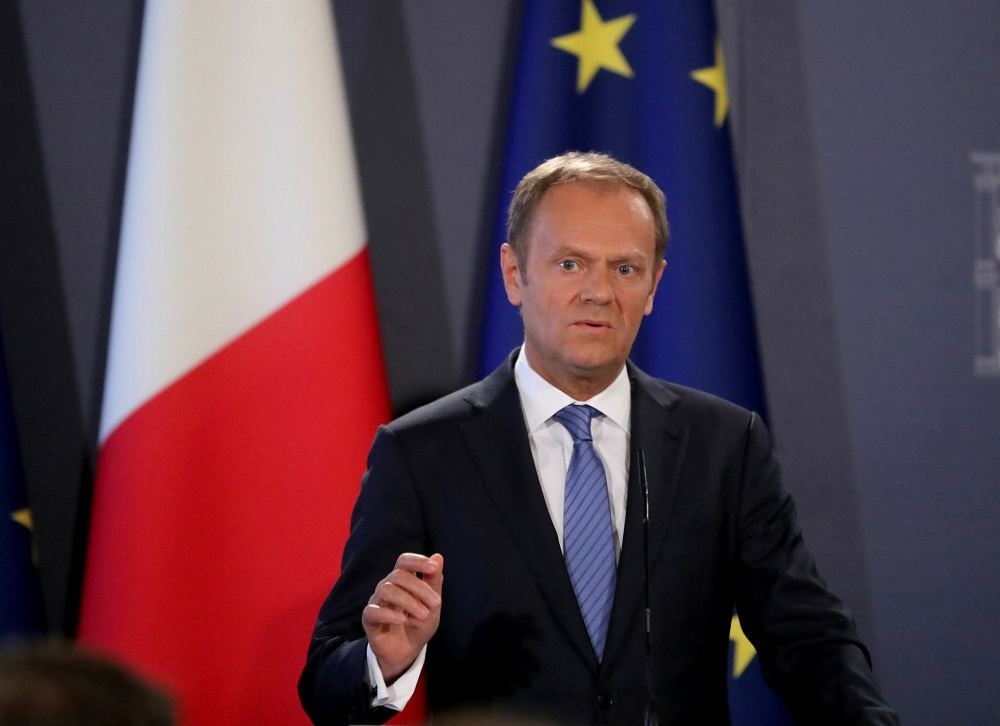 Donald Tusk, President of the European Council issued draft guidelines on how the EU intends to negotiate Britain's departure from the European Union on March 31. (EPA Photo)
by Angelos Berberakis Apr 01, 2017 12:00 am

In a referendum centered on uncontrolled immigration and national self-determination, Great Britain decided to leave the European Union on June 23, 2016, the first EU member state to ever do so.

The Conservative government under Prime Minister Theresa May decided to respect the wishes of the people and the democratic process by triggering Article 50 of the Lisbon Treaty on Wednesday. Under Article 50, negotiations need to be concluded within a two-year timeframe, i.e. March 29, 2019.

Now, European Council President Donald Tusk has warned that the coming negotiations will be long and tedious; however, he seemed optimistic and went on to say that the European Union will not pursue a punitive approach to the matter because Brexit on its own is already "punitive" enough.

The EC president also tweeted: "After more than 40 years of being united, we owe it to each other to make this divorce as smooth as possible."

Practically, Tusk proposed a draft on the direction that the negotiations will follow. The draft answers some key questions, such as what would be the fate of European citizens in Britain and vice versa. What is certain for now is that at least until the negotiations have been fully concluded and Britain has both practically and officially left the European Union it remains "a full Member of the European Union, subject to all rights and obligations set out in the Treaties and under EU law, including the principle of sincere cooperation.

"While a relationship between the Union and a non-Member State cannot offer the same benefits as a Union membership," reads the draft, "strong and constructive ties will remain both sides' interests and should encompass more than just trade."

Regarding post-exit economic policy, Tusk has reassured that the EU would be willing to pursue agreements with Britain; however, a free trade agreement "cannot amount to participation in the Single Market or parts thereof, as this would undermine its integrity and proper functioning."

The question of intelligence cooperation was also brought up, and EC President Tusk reassured that this should not and will not be used "as a bargaining chip" after mentioning the latest terrorist attack in Westminster Abbey, London.

"Beyond trade, the EU stands ready to consider establishing a partnership in other areas; in particular, the fight against terrorism and international crime as well as security and defense."

The fate of British overseas territories such as Gibraltar on the Iberian Peninsula and military bases in Cyprus also seems to have been cleared up for now, as the draft states that any future agreements and treaties regarding these territories will be made with individual states respectively and not the European Union, which has special laws regarding Oversees Territories and Outermost Regions, such as British and French islands in the Caribbean Sea, the Pacific, Atlantic and Indian Oceans.