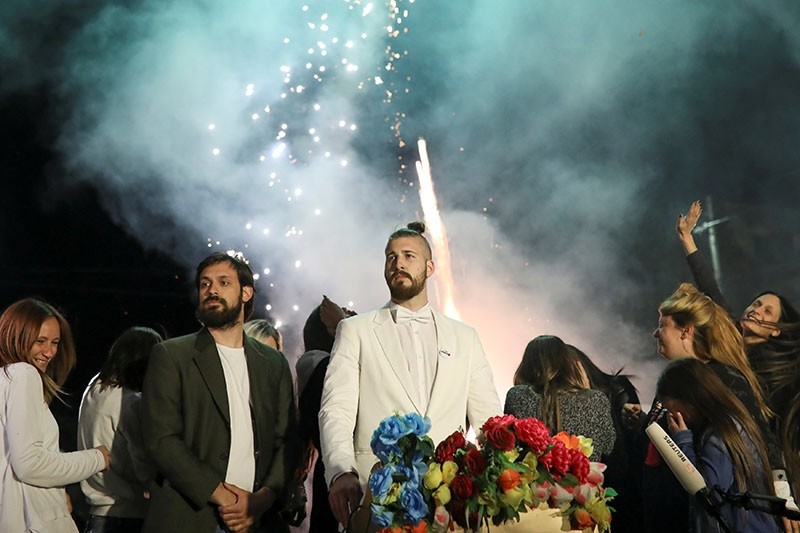 Student and presidential candidate Luka Maksimovic, also known as ,Beli,, talks to media as fireworks explode in his headquarters during elections in Mladenovac, Serbia, April 2, 2017. (Reuters Photo)
by Compiled from Wire Services Apr 03, 2017 12:00 am

Although Serbian Prime Minister Aleksandar Vucic had a stunning victory with 55 percent of the votes, the biggest surprise of the election was Luka Maksimovic, a media student who ran as a parody politician.

26-year-old Maksimovic, a newcomer dark horse who ran as the satirical character of Ljubisa Preletacevic Beli, came in third with 9.3 percent of the votes.

As a satirical candidate decked out in a white suit, oversized jewelry and a man-bun, Maksimovic mocked corruption in Serbian politics by promising to steal if he were elected. His supporters were mostly young voters alienated by Serbia's decades-long crisis and economic decline.

"The phenomenon of Beli needs to be thoroughly looked at, because it may be signaling a very dangerous trend in which people vote against something, not for some action," former Serbian diplomat and university professor Ivo Viskovic said in a debate on RTS.

Maksimovic launched Beli (White) - a sleazy politician without principles other than to remain close to whoever is in power - a year ago for local polls in his hometown Mladenovac.

Following the elections, he also claimed victory and said that he had garnered just under 68 percent of the vote during Sunday's balloting.

Official results from the election are not expected until at least Monday.

That didn't stop Maksimovic from setting off fireworks and shouting: "I am the true winner!" Close associates immediately collapsed around him, pretending to faint at the news.