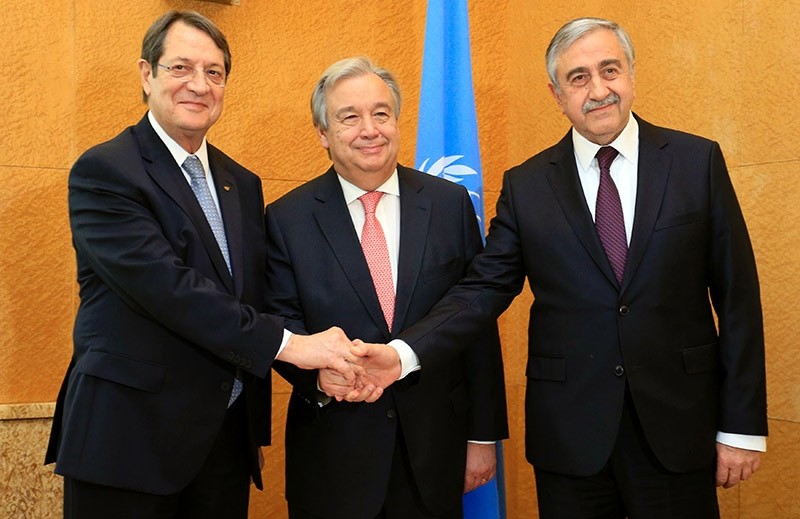 Cypriot President Nicos Anastasiades, UN Secretary General Antonio Guterres and Turkish Cypriot leader Mustafa Aku0131ncu0131 pose before a trilateral meeting at the European headquarters of the UN in Geneva on Jan 12, 2017. (AFP Photo)
by Daily Sabah with Agencies Apr 07, 2017 12:00 am

Lawmakers in ethnically divided Cyprus have amended a controversial law about a commemoration in Greek Cypriot schools that angered breakaway Turkish Cypriots and led to reunification talks breaking off.

The amendment, which gives the education minister full discretion over such commemorations, was passed Friday by a vote of 30-20 with the support from the two largest Greek Cypriot parties.

Turkish Republic of Northern Cyprus (KKTC) President Mustafa Akıncı said that with the latest decision, talks would be resumed April 11 after a nearly two-month break.

The law had made the brief schoolroom commemoration of a 1950 referendum for the island's union with Greece mandatory. Turkish Cypriots saw it as a deviation from the stated goal of reunifying the island as a federation, something that Greek Cypriots strongly denied.

The eastern Mediterranean island was divided into a Turkish Cypriot state in the north and a Greek Cypriot administration in the south after a 1974 military coup by Greece was followed by the intervention of Turkey as a guarantor power.