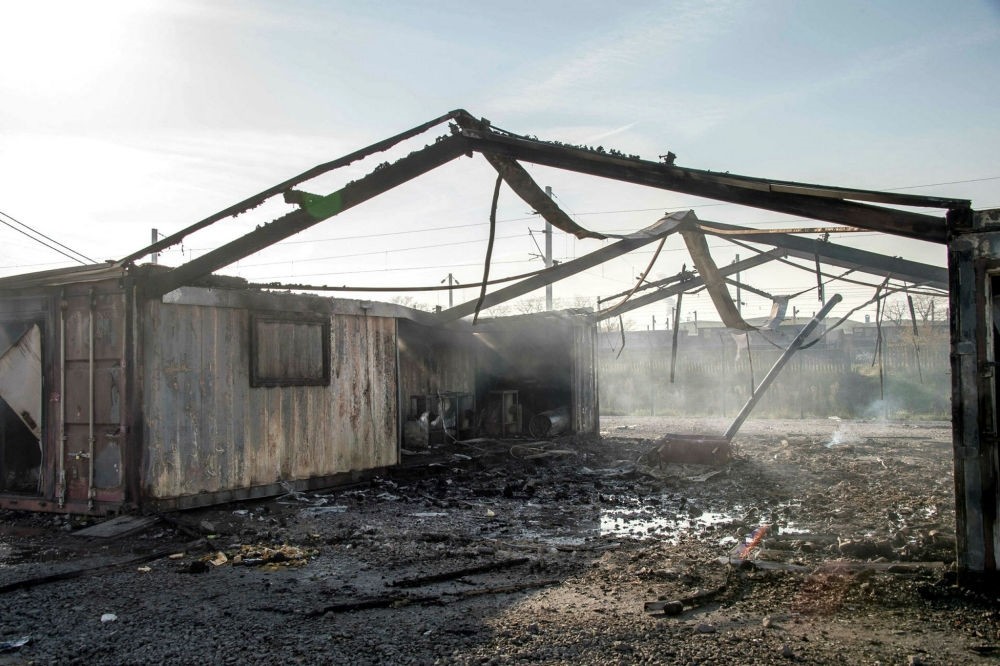 A huge blaze gutted the Grande-Synthe migrant camp outside the northern French city of Dunkirk on Apr. 10. (AFP Photo)
by Compiled from Wire Services Apr 12, 2017 12:00 am

A huge fire has destroyed one of the biggest migrant camps in northern France housing 1,500 people, 600 migrants are missing after they were evacuated from the camp, Doctors Without Borders said

A fire razed most of the Grande-Synthe migrant camp near Dunkirk in northern France overnight after fighting among its inhabitants left several people injured, the region's top government official said Tuesday.

Corenne Torre, head of the humanitarian group in France, said Tuesday that 1,500 migrants were displaced by the Monday night fire that destroyed wooden shelters of the camp in Dunkirk's Grande-Synthe suburb. Torre said while 900 evacuees have been given alternative lodging with associations or in local gymnasiums, some 600 migrants are unaccounted-for. She said "we just don't know where they are." She said that 10 migrants are in local hospitals with light injuries following the fire that came hours after a clash involving up to 150 migrants.

The camp, set up just over a year ago and equipped with tightly-packed wooden cabins and sanitation, had housed around 1,500 people. Its population has grown recently with a surge of arrivals from Afghanistan.

"The camp has largely been destroyed," Michel Lalande, prefect for France's Nord region, said by telephone, adding that the fire followed a fight between the Afghans and Kurds there.

Grande-Synthe has been home to one of the largest groups of Britain-bound migrants on the French coast since the closure last October of a sprawling shanty town outside the nearby port of Calais.

Last week, some of its inhabitants tried to block the nearby highway with tree trunks and branches in an attempt to stop the traffic and clamber onto the trucks and cars in the hope of reaching Britain. Sights like these in recent years to some extent drove Britons to vote for a divorce from Europe last summer.

The Afghans were apparently unhappy at being put up in the communal kitchens while the Kurds slept in chalets, local sources told AFP. The brawl was the latest in several violent incidents at the camp, with police intervening last month after five men were injured in a fight. Another man was stabbed in November.

Interior Minister Bruno Le Roux announced plans to close the camp in March, citing public order problems. The government also believes the camps encourage people to travel to northern France where they seek to break into trucks heading to Britain or pay smugglers to help them get across the Channel.

Migrants have been encouraged to register asylum applications in France, but many are determined to travel to Britain for family or language reasons, or because they believe work opportunities are more plentiful in Britain. Repeated break-ins around ports in northern France have caused delays to travellers and truck drivers. Local residents have also complained about the damage done to the image of their area.

The large influx into Europe of migrants fleeing poverty and war elsewhere is also a hot button issue in France, where the far-right, anti-immigration leader Marine Le Pen is one of the frontrunners in a presidential election now less than two weeks away.

Le Pen on Tuesday repeated that she would close migrant camps and France's borders, also drastically cutting migration should she be elected.

"This chaos has to end," she said in a statement. Opinion polls show Le Pen tied with centrist Emmanuel Macron in the first round on April 23 then losing to him in a run-off of the two top scoring candidates on May 7. Lalande said five people had been hurt as a result of the blaze.
RELATED TOPICS