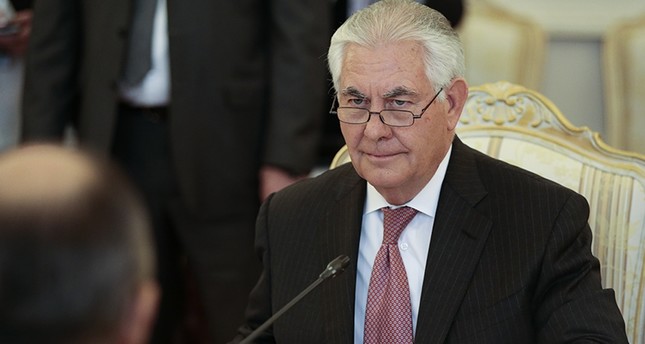 Russian President Vladimir Putin met with U.S. Secretary of State Rex Tillerson in Moscow on Wednesday as the two countries traded sharp accusations about a chemical weapons attack in Syria.

Putin received Tillerson at the Kremlin along with Russia's Foreign Minister Sergei Lavrov after the top diplomats held several hours of talks dominated by the fallout of an alleged chemical attack in Syria.

Despite initial hopes in Moscow of better ties with the US under Trump, the two powers have descended into a furious war of words over the incident and a retaliatory U.S. missile strike against the forces of the Kremlin's ally Bashar Assad last week.

Russia has slammed Washington's attack on a Syrian regime airbase and, as Tillerson met Lavrov, Putin admitted that relations have worsened in the three months that Trump has been in office.

"You can say that the level of trust on a working level, especially on the military side, has not improved but most likely worsened," Putin said in the transcript of an interview with Mir television released by the Kremlin.

"Where is the proof that Syrian troops used chemical weapons? There isn't any. But there was a violation of international law. That is an obvious fact."

The meeting was steeped in geopolitical intrigue, with neither country saying ahead of time if it would take place or not.

Giving Tillerson a chilly reception, Russian Foreign Minister Sergey Lavrov said Russia was trying to understand the "real intentions" of the Trump administration. He said Moscow has lots of questions about the "very ambiguous" and "contradictory" ideas emanating from Washington.

"We have seen very alarming actions recently with an unlawful attack against Syria," Lavrov said, referring to the cruise missiles Trump ordered to punish Assad for using chemical weapons. "We consider it of utmost importance to prevent the risks of replay of similar action in the future."

It was an ominous start to Tillerson's visit. Tillerson conceded the two world powers had "sharp differences" that have obstructed cooperation but voiced optimism that their talks could narrow those differences.

"We both have agreed our lines of communication shall always remain open," Tillerson said.

Trump, meanwhile, told Fox Business News that the U.S. had no plans to become more deeply involved in Syria and only did so because of last week's deadly chemical weapons attack that killed dozens. Turkey has said tests showed sarin gas was used.

"Are we going to get involved with Syria? No," Trump said in the interview, which aired Wednesday in the U.S. "But if I see them using gas...we have to do something."

The palpable tension hanging over Tillerson's trip spoke to a widening chasm between the former Cold War foes.

Only weeks ago, it appeared that Trump, who lavishly praised Putin throughout the campaign, was poised for a potentially historic rapprochement with Russia. But any expectations of an easy rapport have crashed into reality as the two countries trade escalating accusations over what happened last week in rebel-held territory in northern Syria.

Of Assad, Trump added: "This is an animal."

And Putin, who U.S. intelligence agencies say tried to help Trump get elected, insisted that relations with the U.S. had only gone downhill since Trump took office in January.

"The level of trust at the working level, especially at the military level, has not become better but most likely has degraded," Putin said in an interview broadcast Wednesday by state television channel Mir.

Moscow has strenuously objected to Trump's decision to launch 59 U.S. Tomahawk missiles at a Syrian air base that the U.S. says was used to pummel civilians with nerve gas, resulting in 87 deaths. Russia, Assad's staunchest ally, has insisted that Assad is blameless and that it was actually the rebels responsible for the disbursed chemical weapons.

Intelligence services from several Western countries dispute that claim. The health minister in Turkey, which treated many of the attack's victims and conducted autopsies on others, said Tuesday that test results conducted on victims confirmed sarin gas was used.