Some 900 dead in Mediterranean amid renewed migrant flows 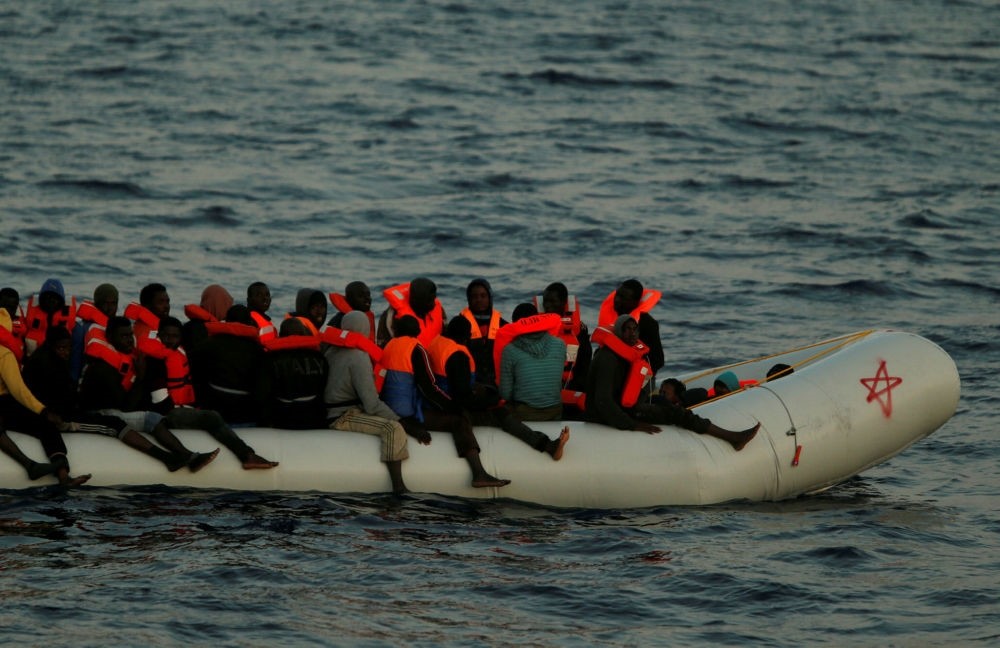 Migrants on a rubber dinghy awaiting rescue in international waters off the coast of Sabratha in Libya, April 15.
by Compiled from Wire Services Apr 21, 2017 12:00 am

As improved weather conditions fuel renewed migrant flows, some 900 people are known to have died so far this year, the IOM reports. Aid groups criticize the EU-Libya migration deal, saying that it would lead to more deaths

A growing numbers of migrants are attempting the crossing to Europe in flimsy, overcrowded boats as the spring weather improves. Smugglers have made ever-riskier attempts to ferry asylum-seekers and refugees on increasingly unseaworthy vessels, leading to an increasing number of migrant deaths in the Mediterranean. The IOM reports some 900 people are known to have died so far this year.

Meanwhile, the entry into force of the new Libyan patrols could heighten tensions that have already flared between the European Union and humanitarian organizations, which have assumed an increasing role in rescuing migrants as their vessels tend to patrol closer to Libya's territorial waters, and their numbers have skyrocketed in the last two years.

Overall, Some 35,700 people have been rescued in the central Mediterranean route in 2017, up from 24,974 in 2016, the United Nations High Commissioner for Refugees said. Molinario noted that the numbers are constantly in flux and a week or two of poor weather could alter the year-on-year comparison.

While such numbers are not unheard-of for this time of year, they come as Italy is preparing to deliver patrol boats to Libya as part of a new European Union-blessed migration deal.

Italy and Libya inked a deal in February calling for Italy to train Libyan coast guard officers and to provide them with a dozen ships to patrol the country's lawless coasts. EU leaders hailed the accord as a new commitment to save lives and stem the flow of migrants to Europe, where the refugee influx has become a pressing political issue.

Aid groups, however, have criticized it as hypocritical and cruel, arguing that migrants who have already endured grave human rights abuses in Libya will face renewed violence, torture, sexual assault and other injustices if they are returned by the Libyan coast guard. Doctors Without Borders called it "delusional" while even the Vatican's own Caritas charity said it was worrisome.

International Organization of Migration spokesman Flavio Di Giacomo said improved weather conditions certainly are fueling renewed flows in recent days. But he said smugglers are also telling their customers, "'You have to hurry up and leave the country right now because otherwise in a couple of months you will be rescued by the Libyan coast guard and you will be sent back,' which is the last things that migrants would like to do."

The United Nations refugee agency also cited the pending arrival of Italian patrol boats as a possible cause for the weekend's high numbers, although spokeswoman Barbara Molinario said it was too early in the season to identify trends.

The overthrow of Libyan strongman Muammar Qaddafi in 2011 has spawned chaos across the country. The power and security vacuum turned the country into a breeding ground for militias and militants, including Daesh terrorists and al-Qaida affiliates. It has also made Libya a gateway for thousands of migrants from Africa and elsewhere seeking to cross the Mediterranean to Italy.
Last Update: Apr 21, 2017 1:46 am
RELATED TOPICS