Security in tatters in France ahead of presidential vote 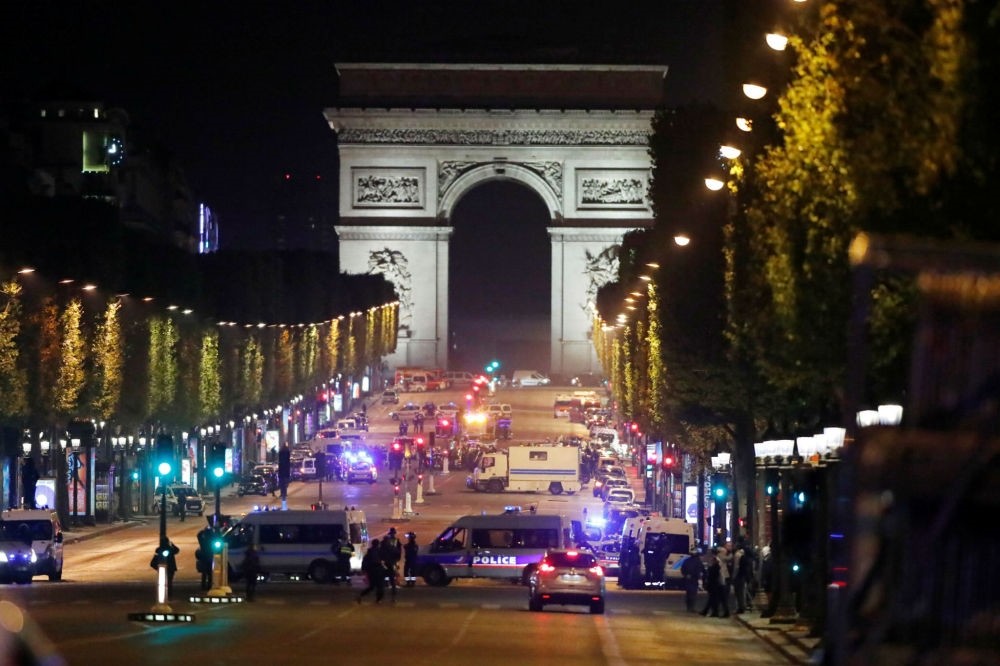 French police officers after a shooting in which two police officers were killed in a terror attack near the Champs Elysees in Paris, France, April 20.
by Angelos Berberakis Apr 22, 2017 12:00 am

Just two days from the first round of the French presidential election, Paris was yet again hit by a terrorist attack in which a police officer and the gunman both died

On the night of April 20, during a French presidential debate no less, a gunman, believed to have been armed with an AK-47 "Kalashnikov" assault rifle, walked up to French police officers waiting at a red light in their patrol car, opened fire and managed to murder one and heavily injure two other officers before being shot dead by a nearby patrolling unit.

The area around the Franklin D. Roosevelt metro station on the Champs-Élysées boulevard has been locally blocked off from public access as heavily armed police units made their way there and the surrounding streets.

Karim Cheurfi, A.K.A. Abu Yusuf al-Beljiki, the killed perpetrator, was known to French authorities, however he was "let go" according to police sources due to "lack of evidence."

Initial sources believed that two terrorist gunmen were involved, however this has not as of yet been verified but Daesh has already claimed responsibility for the attack, linking it to their "soldiers" in Belgium; an eerie reminder of France's deadliest attack since the Second World War on November 2015, which left 130 dead and 368 injured.

Many months after these coordinated attacks and subsequent suicide bombings, of which there were six all over Paris, it was revealed that one of the escaped perpetrators, Salah Abdeslam, had been hiding in plain sight in the notorious neighborhood of Molenbeek in Brussels before finally being taken into custody after a series of raids by Belgian authorities, during which several suspects were detained while others escaped and one was shot dead. Abdeslam had successfully evaded a pan-European manhunt for four months before finally being found on March 18, 2016. Brussels was also hit by a nail bombing on March 22, which left 32 dead and 340 injured in an incident believed to have been retaliation for Abdeslam's arrest.

Even though the November attacks were the deadliest, they were neither the first nor the last. Shootings, stabbings and bombings have been going on in France since the start of the new millennia and they've only intensified in frequency, however it was the January 2015 Île-de-France shootings, starting with the Charlie Hebdo incident, which left 15 Frenchmen dead, that prompted the French government to declare a state of emergency which was extended and is still ongoing.

There's also been a series of vehicle ramming incidents, which has been copied by terrorists across Europe due to their simplicity and deadly effectiveness. The first instance of such an event was an attempted ramming of four soldiers guarding a mosque in Valence, Drôme; the as of yet most successful ramming, however, came on July 14, 2016 in Nice, when a 19 ton cargo truck was deliberately driven into crowds celebrating Bastille Day on the Promenade des Anglais, leaving 86 dead, at least 10 of which were children, and 434 injured.

The attack pattern seems to have been replicated on Dec. 19, 2016, when another terrorist, who had also been known to German authorities for extremism and radicalization, rammed a stolen truck into Berlin's Breitscheidplatz next to the Kaiser Wilhelm Memorial Church. Leaving 12 dead and 56 injured, including the murdered Polish truck driver. The perpetrator, Anis Amri, fled the scene and on Dec. 23 was shot dead by Italian Police officers in Milan after he had drawn a pistol. Another similar ramming occurred in Westminster, London, outside the Houses of Parliament which left fivedead and 49 injured. Khalid Masood, who was identified as the attacker, was shot by armed officers on the scene after having fatally stabbed an officer of the Metropolitan Police.

As of July 2016, some 3,600 locations have been raided by police in France, leading to the capture of 40 weapons of war and over 500 other weapons.

Now the latest shooting on the Champs-Élysées has prompted French politicians to comment, with the Front National's Marine Le Pen stating "Emotion and solidarity for our security forces, again being targeted."

"The fight against terrorism must be the absolute priority of the next French president," said Francois Fillon, who proposed arresting all suspects on the "Fiche S" watch list, on which was the shooter, which names direct threats to French national security.

US President Donald Trump weighed in, during his press conference with Italian Prime Minister Paolo Gentiloni, giving "condolences from our country to the people of France. It looks like another terrorist attack… What can you say, it never ends."
Last Update: Apr 22, 2017 6:44 pm
RELATED TOPICS